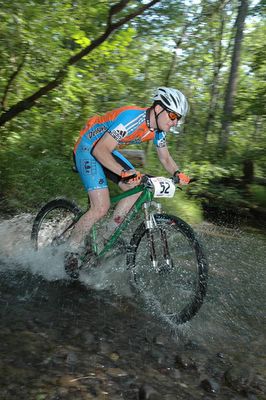 
The Simonster takes the win and Stony Creek, flats out of Fenton RR (not before putting the hammer down from the start and making people hurt). Mike checks in below with his weekend summary !
Doing The Double race weekend always proves to be quite a challenge. This past weekend was a perfect time to do it as there was a local road race in Fenton followed by a mountain bike time trial at Stoney Creek in which my house is conveniently located smack dab in the middle of both. The road race started out good. I created a 4 man break right off the line which lasted almost the first lap. I figured with all the hills in Fenton, that a break would succeed, but that proved not to be the case. Small groups formed off the front several times in which I bridged to on almost every occasion, but the cards were just not in the deck for me. Heading into the last lap I heard the dreaded pssst, I had flatted on a section of Michigan Pave and that was the end of my race. I thought it was a great course and well worth the 35 bucks just to get some insane training miles. (. I hadn't even thought about doing the Stoney TT on Sunday. The plan was to meet up with my training buddy Robert and ride after the race. I started from my house at 9AM and thought I would take a longer route and show up at 11AM. Then I thought,.. I'll go watch some of the TT. On my way in, I realized I could get there before 10AM! So I arrived exactly at 10, got my timing chip and basically rolled through the start tent and I was off. I ran a rigid bike with aerodynamic Kryseriums and super light 42c Ritchey CX tires. It was a bit bumpy, but the bike screamed on the two track and the climbs. The huge log on the last creek crossing at the end took me by surprise! Somehow I ended up on back in the muck. It was kind of a nice cool off though. Much to my amazement, I ended up winning the time trial by a scant 3 seconds! Robert rode with me back to my house and I ended up with about 3 hours on the day. Good weekend of training and preparation for the upcoming Ore to Shore, the first round of the growing Triple Crown series.

I'd classify that as a death march weekend.