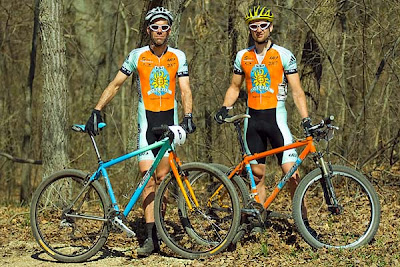 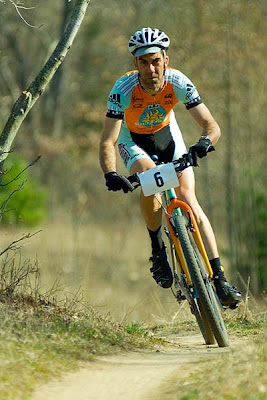 
One Week Later. This weekend the winds were a blowin west. Towards beautiful sunshine, super fun and dry trails and Michigans Native 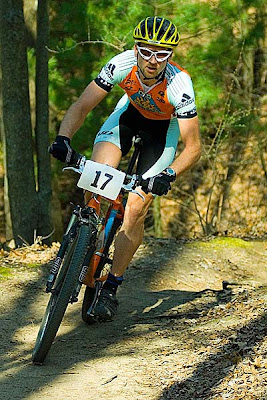 Sun, Oberon, at the Bell's Brewery in Kalamazoo. Another great showing of racers this weekend. About 25 lean mean MTB'n machinesin the Elite field. I hope we have at least that many for the cross country events coming up. I just saw the pro field in the World Cup yesterday was 200+. That's a bit much but it would be great to see 30 or 40 racers. Come on Michigan! Let's put MTB'n back on the map. I'm much happier this week about my race. I felt better and could tell the form is coming along. My legs weren't screaming the entire time as they were at Pontiac Lake. I didn't ride over my head and kept the Quiring bike upright. A pretty good ride. I almost wished it had been another lap. I think it was just the magical powers of the sun. After the race we were off to the Bell's Brewery to refuel. The Biergarten is open for business! It reminded me of summers in Germany. What a fantastic place to hang out. Especially after a MTB ride. Doesn't get much better. Someone at work just mentioned there's train service to Kzoo. Hmm. I need to look into that. See ya at the next one everybody. Enjoy the weather and be safe.


Jason Lummis raced at www.parisancaster.com on the same day against 2000 crazy canadians. He managed a 31st despite a major mechanical which resulted in the use of only the larger cogs on his cassette. His Stans ZTR wheels and Crow tires made the mostly RR bed, dirt road and farm fields roll smooth. It was great race weather this past sunday for all.
Fort Custer XC race May 6th is next up after Simonster heads to Maryland for the AMBC state Championship he won last year ! This weekend--- Good Luck Mike !
Posted by Quiring MTB Team at 7:06 PM 3 comments:

Photo by Bryan Mitchell--- www.moutainbikephotographer.com --- Bryan is a professional photographer and can be contracted to do personal or team action photos @ many Michigan events ! 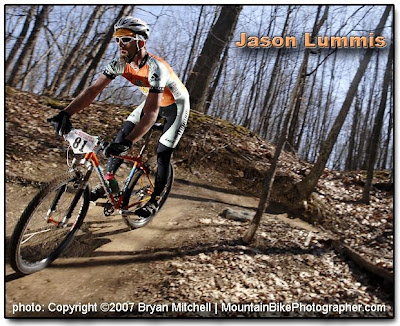 Jason Lummis and JOBERON attended the 1st MTB race in Michigan this past Sunday. Weather was perfect for an awsome trail, mid 40's and sunny (what else do you get in Michigan in April besides snow or rain). The Elite race had 20+ starters and the 2 (10mile) laps where just long enough to make it hurt, especially for a time trial with 15 secs seperating the racers.
Jason Lummis finished 7th and Joberon 15th. They both sent a race repot in, please read below:
RESULTS

JOBERON:
Win or Lose:
I've noticed that regardless of your result, Bell's Beer still goes down nicely.Win or lose. Good day on the bike or bad. There's always reason to crack open anicy cold bottle(s) of some of Bell's finest beverages.
Perhaps my expectations were a bit too high. I've always labeled PLRA my "home"course. Sure, I was pumped to be out on my favorite trail racing. What a startto the season. But being that it is my "home" course I kind of psyched myself out a tad. Luck was on our side in form of the weather. And thanks to the hardwork of volunteers the trail conditions were fantastic. Robert and the Tailwind crew did a superb job with the first MTB event of the year. The turnout was good for this early season test. I was really happy to see 20 guys in the Elite group.I think by the time I reached the first large climb I noticed my legs weren't there. I managed to catch a couple of guys during the two laps but mostly spent time getting whaled on by others. There were some impressive lap times and some impressive early season form out at PLRA yesterday. Unfortunately, not forme...yet. Great job to everyone yesterday. It was nice to be back racing and hanging withfriends. Here's to summer and a kick azz season.
Cheers,
Joberon

Jason Lummis:
The first race of the year is over ! I managed to finish in the top 10 @ 7th. The 1st lap hurt, especially with no amount of hard efforts in my riding/trainning so far. The second lap felt a little smoother and I found some motivation to keep the pace up. I never want to be on form this early as we have a long race season that ends in November. Robert from Tailwind ran a very great race and can't wait for thr Brighton Stage race (where talking 5 miles from my front door). It was great to see my racing friends on a great day and trail. I ran the Geax Saguaros front and rear on STANS ZTR 355 wheels with 30 psi with a front shock. They hooked up great especially on the 1st lap where there where a few greasy corners at speed.

Next race for me will be www.parisancaster.com, hopefully I can be there to help the Simonster 3peat at this fun Point to point race of 60K.

Saturdays STXC was a little muddy ! 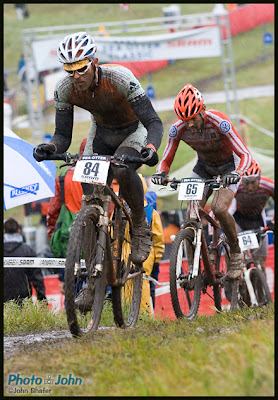 Mike Simonson is out in California for the 17th annual Sea Otter Classic.

Mike's bike the day he left for the Otter, hope he brings some California sun back with him.... 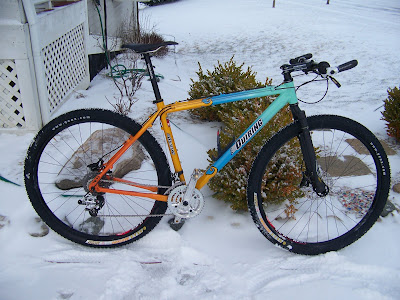