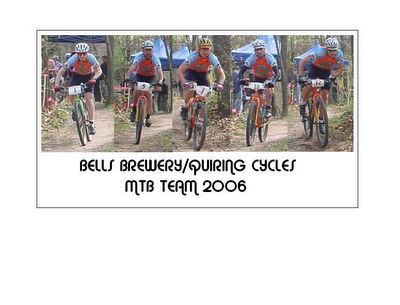 Mike Simonson takes his 3rd Elite win of the year for the Bells Brewery/ Quiring Cycles MTB Team. Scott Quiring takes 5th on his single speed Elite, Jason Lummis 6th Elite, John Meyers 7th Elite and Joberon 17th Elite. The Yankee Springs TT is the 1st MTB race for Michigan yearly and has a large turn out to stretch the racing legs out. The TT is an 11 mile single track race against the clock, Elites start 15 secs apart for bait. While taking 4 of the top 7 places the Bells Team let a secret out on Michigan races, rigid Quiring 29ers are a fast ride and can handle a rough trail. An added bonus to the Yankee race is the close proximity too Kalamazoo and the Mother ship Bells Brewery, where a quick stop to refil and refuel the supplies of Bells clothing and beverages to accomodate us for awhile. We will be back the 7th after Fort Custer Stampede a nice 2:30+ hour XC race. Pictures soon ! It really is about the bike and the beer !
Posted by Quiring MTB Team at 8:14 PM 1 comment:

The Simonster DEFENDS his Title at Paris-Ancaster

France has Paris - Roubaix, Ontario Canada has Paris-Ancaster. The only difference besides no cobbled roads is about 200km of racing, but the 60km race is hard enough. Mike Simonson defends his 2005 title with his 2nd win of 2006. As always Mike animates the pace of any race he enters, read the highlights below. Notable finish by team members Joberon Brewchampski and Jason Lummis 27th & 29th respectably in a field of 1200+ racers. Click title for race site results and pics.

The Simonster reports in:
I woke up at 5:00AM on Sunday, much to the delight of my two team mates, ready for my thermos of coffee. Sub freezing temps as usual. It was the day of the classic Pairs to Ancaster bike race in Ontario Canada in which I was to defend my title from exactly one year ago. The start line was crowded as usual. All sorts of people trying to persuade the promoter to let them squeeze into the front line. Before we all knew what was going on, we were off and I took the whole shot. I looked behind me to see a slew of riders grasping my wheel. The course turned back and forth on some dirt roads prior to heading into the first long stretch of rail trail which was where the first miss-hap occurred. The point man of the race headed straight instead of turning. This caused a huge back up of riders leading into the rail trail. Good thing I had my team mate Jason Lummis in the front to keep things under control until I was able to return to the front of the race. It wasn't long before I was ready to attack heading into the tight right hander off the rail trail and up a gravely climb. I stretched the race out and a group of 6 of us formed. We mostly worked together with the #1 plate being forced to do the lions share of the pace making, which is typical. Most of attacks happened in the muddy tractor trail that was thrown at us periodically between fast paved and dirt roads. The attacks were held under control with the use of the 21 pound titanium Quiring bike I was riding with 29 inch wheels. It just seemed to gobble up the bumpy muddy tractor trails with ease, yet still be effective on the hard packed dirt and paved roads. It wasn't until the end of the race where the group of six of us turned into three after the first 100 yard downhill mud slide. The two leaders ran down the hub deep mud, where as I rode it, losing a little bit of time. I worked like mad to catch them on the ensuing dirt road climb coming out. We then entered the second downhill mud slide. This time both of the guys I was with crashed and I knew this was my chance. I pointed the 29er straight down the throat of muddy beast, closed my eyes, and let go of the brakes. By the grace of god, I found some magical line that had me 20 seconds in front of the leaders after the mud shoot with only a few miles to go. I carried the gap all the way to the steep uphill finish to take the win and defend the Paris to Ancaster title. All in all I though it was a very well run event this year, and I hope to return. Thanks to my team mates Jason Lummis (29th) and Joe Brzuchanski (27th) who drove and made the trip with me. Thanks to Scott Quiring who built me a bad ass 29er machine specifically designed to help me win point to point races, and thanks to Bells Brewery for supporting such a strong team. 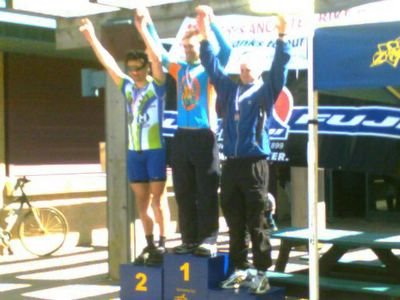