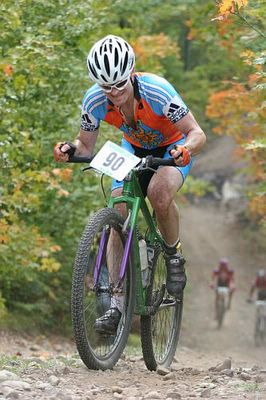 All photos of Cheq are from: http://www.skinnyski.com/

Posted by Quiring MTB Team at 11:08 AM No comments: 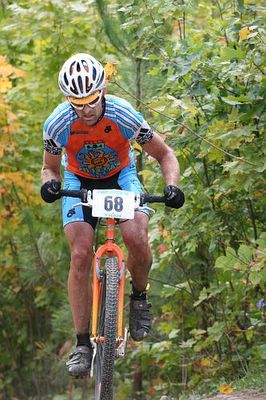 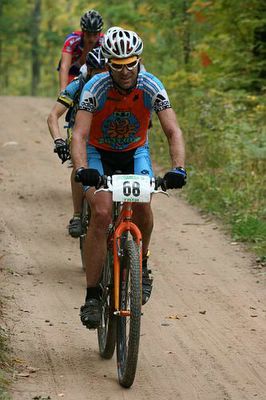 Posted by Quiring MTB Team at 11:03 AM No comments:

The Midwest World Championships are history................ JHK pulled out the win after Doug Swanson flatted 2 miles before the finish.

Bells Brewery teammates Scott Quiring, Mike Simonson and Jason Lummis made the 11hr pilgrimage to Cable last Thursday, stopping in the Upper peninsula for a good nights sleep on the way. Arriving in cable Friday afternoon for a quick pre-ride of the final 10 miles from Sealy Fire Tower to the finish at the Telemark Resort. Everything was set for a fast and dry Chequamegon 40. Mike, Scott and Jason choose to run their 29ers rigid with the Stans No tubes sealant. It is nice to have a Big wheeled bike that weighs less than 22lbs (Mikes 21, Scott 20 and Jason 21.5lbs).
Saturday morning was perfect, a little overcast and warm still. We pre-rode the starting 5 miles and headed back for the start line. Mike and Scott where right in the front and Jason a few rows back, no biggie since they have a 2 mile controlled start. The start was same ole surging and swaying and surging as per usual. Jason Found himself on the left side of the road and being pushed into the ditch a few times. Not wanting to be on the left Jason launched off the front to move over to the right, bad timing as this was a hundred yards from the real start of the race Rosies field. The pack swallowed him whole and held on for dear life across the hay field (Rosies). Onto the the Burkie ski trail the racers where strung out for miles. Mike Simonson was right there in the top 5 feeling the tempo and 4 miles into the Birkie Mike hit a rock and bent is rim. Game over no air left and the rim kept puncturing his tube. Mean while Scott Quiring was plugging away just ahead of Jason Lummis. Scott has been recovering from leg muscle problems and working a lot producing custom bikes and Q Ball frames. Jason Lummis was feeling a little better after the pain of Rosies and started moving up thru the field, never quite seeing Scott. Scott and Jason rolled thru the trails on their 29ers passing many and getting passed by a few, but still never knew they where just a hill apart. Scott finished 22 overall and Jason 27.......... And we had a few Bells Oberon's to celebrate. The Simonster was bummed, but hey you win some and then the rest are just life lessons to build on.

Next race Addison oaks (MMBA cps) John Meyers has the series overall just about locked up.....
Summer is over Oberon is on hold till next year, Two Hearted is out and the flavor is great.... Bring on the Best Browns and Double Cream Stouts the leaves are changing in the U.P.

Beers to you all for having a great summer and a better fall and winter.
Posted by Quiring MTB Team at 10:30 AM No comments:

This past sun day was the final NORBA race of the year for Michigan MTB race scene. Mike Simonster needed a win to pull out the series overall. Mike did not disappoint his team and fans. Rolling to an easy win Mike finished 1st in the series followed by Christian Tanguy, Greg Kuhn, Jason Lummis and Robert Herriman for the top 8 in the Pro/Semi-pro class (Elite).

The course was a mix of 2 track and single track for about a 6.5 mile loop of which the Elites did 5. Mike controlled the race from the start riding his Quiring rigid with Krysiriums and Cross tires. Jason Lummis battled teammates Greg and Robert for all 5 laps and finished just short of the 2 in 5th. Giving the podium a Bells Brewery and American Cycle & Fitness top 5.

Thank you to Robert Linden of Tailwind for promoting another season of great races. To all the teams and racers that made each race a fun event, keep training and racing. Michigan does have a MTB race scene and we do have great races, come out and enjoy.

Fort Custer State rec area was the venue for Tailwinds Time Trial series. That saturday night it rained and continued to rain until a few hours before the start of the 10am Elite. The race was slippery and wet for most Elite and Experts and dried as the sun came out to play for the Sport/Begginers.
Jason Lummis took the win besting a nice sized Elite field. John Meyers 3rd, Scott Quiring 5th and Joberon 6th. Nice job guys way to keep the winning/podium spots run alive.
Series Overall had Mike Simonson in 2nd with Jason Lummis and John Meyers tying for 3rd.

The team then headed over to Bells Brewery in near by Kalamazoo to refuel and celebrate another great weekend of racing. The bar staff is always friendly and the food is great ! The beverages speak for themselves and there is always a few beers on tap that are not available in stores.

Happy Trails
Posted by Quiring MTB Team at 11:52 AM 1 comment: