The Simonster in front of his winning ride holding the winners trophy and $$. Here is a link to a short video taken by Jan Mack at the awards: 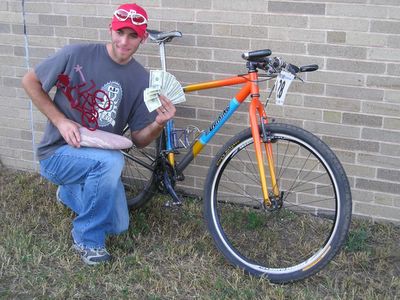 THE SIMONSTER REPORT:
I looked over to my team mate Joberon and said "This is it, We are supposed to feel the best we have felt all year, RIGHT NOW." It was the morning of the Ore to Shore MTB race in Marquette MI and we were out doing our casual warm up for the 48 mile suffer fest against some of the best bike riders in the Midwest. We got lined up for the start as we all listened to this crazy guy singing songs. All I could hear was him screaming, (Queens) Bicycle! Bicycle over and over again and I caught one of Jason Lummis' smart ass remarks out of my right ear "Hey, it's Simonster after 6 beers." Then, 54321 we were off. Doug Swanson took the whole shot and began a relentless attack right off the start. It pretty much stayed together on the pavement except for a couple of surges from the tandem and Swanson. We made our way onto the dirt and veered over next to the railroad tracks where the tandem decided to take the smooth line right up next to the tracks. My team mate John Meyers and I stayed on the bumpy grass and sure enough, we ended up right on the front of the race. I came to the front and lead the race over the first little undulation and towed everyone to the base of the luge run climb. I put it down pretty hard up the first little section and carried it all the way to the top. I looked back and Swanson was the only one who stayed with me. We were together for another few hundred yards where we got to another bumpy loose hill. I gave it one more hard effort and Swanson had popped off my wheel. From that point on I knew I had to dig in and open up the gap as far as possible. I wound out my 44-11 and hit 30 MPH on a few of the early flat sections in my best time trial position. Before I knew it, I was out of sight. I had no idea how big the gap was until about half way through when I ran to the top of Misery Hill. I looked back and didn't see anyone! At that point I knew I just had to keep the pace up and avoid mechanicals and I would roll in for the win. I was so excited and full of emotions when I saw my wife Mitch out on the course, I almost screwed up the bottle hand up at mile 27. I downed the entire bottle and kept cranking on my way to the win. It was nice to be able to slow down near the finish and enjoy the moment. The Quiring 29er performed incredibly, as it should have, seeing as Scott designed the bike specifically for winning the Ore to Shore. I ran a rigid Q stick cromo fork along with a couple of other trick partsÂ Â and got the weight down to 20 lbs. 29er frame and wheel/tire technology has come so far in the past year it's a noticeable difference. I would aslo like to thank the o2s race committe for putting on another great event and the Marquette county residents for supporting the race and racers the whole weekend. The awards where great and the people even greater.
Posted by Quiring MTB Team at 8:43 PM