He's going to be fine :o). He is out of ICU & in a regular room now. He is still heavily medicated for pain and it will be a long road to complete recovery but the bottom line is he's definitely going to make it there eventually! He is doing better than expected & getting better each day. Anyone that knows him, knows he's pretty darn tough & very determined. Both are qualities that will prove to be important in the months ahead. Amazingly Jason has has already managed to take some short, slow walks down the hospital halls & to the restroom with the assistance of a walker! Also he has to wear a special brace (wearing it in the picture) to keep his spine in place for a few months while his fractured lower back heals. 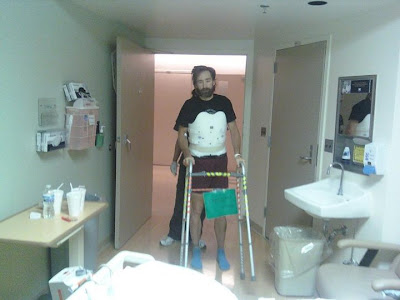 I'm not sure yet on how much longer he will have to remain in the hospital. I believe Jason said he could find out tomorrow when he may leave.

Thank goodness he has a lot of friends & a wonderful family to help him through this tough time. Him & his wife Kathy have definitely been touched by everyones support and really appreciate it.

I'll leave you with Kathy's own words...
"THANKS EVERYONE for all the support, thoughts & prayers! We R truly blessed it has been breath taking & heart warming knowing so many people care! Jason is going to be fine we R SO LUCKY & know it will be a long recovery, but we all know Jason he is a strong one & WILL be back in the saddle soon. God Bless each one of you for touching our hearts & making this very difficult situation so much easier! LOVE U ALL !!!"
Posted by Quiring MTB Team at 7:16 PM No comments:


On Wednesday August 25th, our teammate Jason Lummis was riding his 20 mile commute by bike from his job at Great Lakes Cycling & Fitness in Ann Arbor to his home in Pinckney when he was struck by a vehicle around 9:00 pm & severely injured. The vehicle has been estimated to have impacted Jason at a rate of 50- 60 mph. The driver never stopped when they struck Jason & sent him into a ditch where he laid bleeding & critically injured until two motorcyclist found him. 911 was called & Jason was taken to UofM Hospital & has remained in the ICU to treat his injuries. He lost a lot of blood because of a vein punctured through his left gluteus muscle. That wound is 1" wide but of unmeasurable depth. He sustained many other injuries & fractures of the hip, pelvis, lower lumbar, & sacrum.

Today Jason will be getting a brace that goes from the neck to his upper hip area to stabilize his spine. It may still be too early to tell but so far it appears that his fractures could possibly be able to heal in time without any need for surgery. I spoke with his wife Kathy this morning and she says that the out pouring of support from everyone has been a huge uplift to Jasons spirit. We all appreciate everyones kind words, thoughts, & prayers for Jason & his family. It is helping!

Besides helping Jason we need to find him justice! We all hope the person that drove away after hitting him will come forward on their own and admit what they have done. The search will continue until they find this person and the vehicle. The police are looking for a FORD F250, F-350, or EXCURSION with a BROKEN PASSENGER SIDE MIRROR. PLEASE BE ON THE LOOKOUT. Especially in the DEXTER-PINCKNEY AREA. Anyone with information about the crash or the driver of the vehicle that stuck Lummis should call the Washtenaw County Sheriff's Department tip line at 734-973-7711.

Posted by Quiring MTB Team at 10:35 AM No comments:

A Weekend of Time Trials 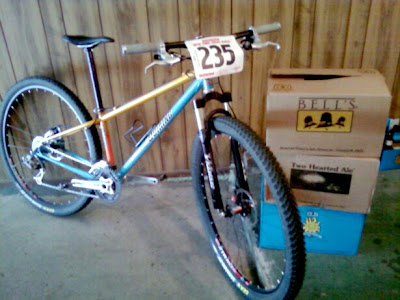 First off was the Maybury TT on Saturday in Northville. At one time I used to live 10 minutes from Maybury & rode there all the time. Having the advantage of knowing the trail helped me for sure in the twisty single track. If you get into the zone there that trail can have amazing flow but if you don't you can end up working a lot harder than need be. Besides the fun single track they added a few more miles of other stuff like pavement, a stretch of gravel rd, & some long grass sections. The turn out for the expert/elite women's group was a bigger than average... 9 ladies! Good to see :o)! The results say 8 but that's only because we lost my friend & former teammate, Andrea Balding (Dark Horse racing), after the first lap to a DNF (bad crash). I think I was fourth to start so I had 3 ladies to chase down & 5 stay in front of. I caught everyone in the first half of the first lap & then just tried to keep a steady pace & not get gobbled up by the competition that started behind, namely Tara Jansen (Farm Team). At certain points on the course you could see other racers & a couple times I saw Dana Baurhenn (Wolverine/ACFstores.com) somewhere not too far behind me but then eventually lost sight of her. At the end of my first lap I was chugging along down a wide grassy section when I spotted a group of 20 people standing on the trail in front of me. I rode through the group & exited with a growling dog nipping at my feet. My first instinct was to 'fight' but I like dogs so instead of feeding it the cleat on my shoe I decided to try 'flight' first. Thankfully that worked as the dog finally gave up the chase. With my heart rate pegged I headed into my second lap. It was for the most part exactly the same as the first... minus the dog and add some rain. I ended up finished in an hour & a half feeling good & never getting passed by my competition. After finishing I cooled down a bit, talked to friends, & got cleaned up. I still hadn't checked results to see how I finished when my friend Brian came over to me & said "Erin you won!". I hadn't had winning ANYWHERE on my radar so I was pretty taken back. #1.Staying Upright & #2.Having Fun were my only goals so needless to say the unexpected bonus of winning left me tickled pink :o). I celebrated with an Oberon, collected my winnings, & then went home to clean up my bike & recoup for the Fort Custer Time Trial the next morning.
Sunday I woke up feeling like I had been in a wreck but I managed to come around enough to prepare a to-go breakfast , throw my stuff in the car, & head out. I wanted to get there early so I had time for a nice long warm up but it turned out I almost didn't even make it to the race. Cruising by myself down 94 West, coffee flowing, radio cranked, starting to wake up... I got a flat tire :o(. I called Lummis & luckily (for me) he was running late & driving behind me about 10 minutes back so he agreed to stop & get me :o)! After that we were running REAL late! When we finally arrived we basically had only enough time to grab our #'s at registration, throw on our kits, & GO! I had preregistered earlier in the week so I started first amongst the ladies along side Erin Disterheft (Team Billy's). Erin & I were always good competition for each other in the past. Knowing what kind of shape she was likely in & knowing what kind of mess I've been coming back from I wished her luck & said "goodbye" before the clock even started. Winning the race at Maybury the day before didn't mean somehow I magically got fast again...lol. I know there is MUCH work to be done still so I let Erin D. go at the start & focused on staying ahead of the other 5 ladies. With no warm up & initially being so sore from the day prior I was surprised at how good I actually felt!!! The trail was in awesome shape & just an absolute rip roaring blast to ride on my 29er. Again I had the same goals... #1. Stay upright & #2. Have Fun! Both were accomplished in about an hour & ten, managing to stay ahead of the competition again for the entire race. After finishing I went for a cool down spin in the park. My friend Andy found me & informed me I got 2nd place! Another big surprise! Again I was shocked & very happy. 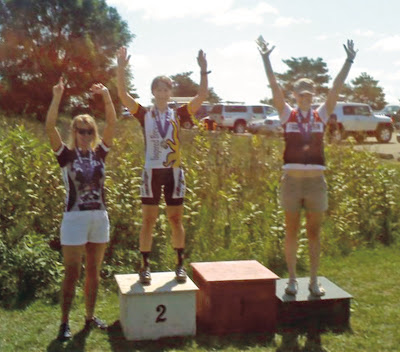 Jason Lummis ended up 10 seconds off the podium in 6th & John Meyers in 8th. After awards and Zack Lummis's 'kids race' we all piled into the mini van & headed to Bell's Eccentric cafe for lunch in the beer garden. Eventually Lummis got me back to my car & I sent them on their way. I can honestly say I almost enjoyed sitting there staring at the corn on the side of the expressway waiting for my tire to get fixed. I had such a great weekend it was actually kind of nice to sit there & reflect on it for awhile :o). 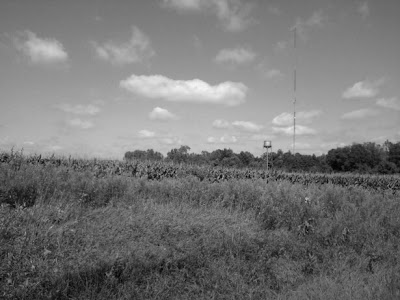 Thanks to everyone who has given me words of encouragement about returning to racing.
I'm so thankful to be healthy enough to be back at it again!

And one more thing... A HUGE congratulations goes out to Sue Stephens on accomplishing her 2010 season goal of winning the Ontario Cup Series. She raced all season against some of the best names in Canadian mountain biking and came out on top! Congrats Sue! We're very proud of you!