JOBERON on the TOP step 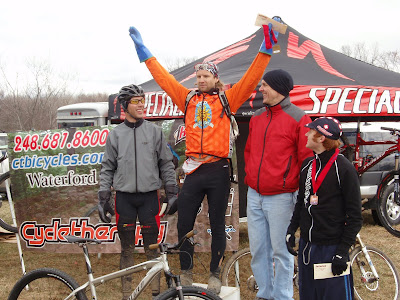 Graduation Day My very first MTB ride was with my good buddy Larry at Pontiac Lake. I believe it was early spring as well as it was quite muddy that day. I recall spraying our bikes off at my parents afterwards and grinning ear to ear the rest of the afternoon. From that day on I never looked back. I immediately entered the Cameron-Clark-Farnsworth-Collins-Luczynski-Dunn-Bowes PLRA School of Big Ring Jammin'. Well, 10 years later I'm happy to say I finally graduated. The Tailwind/USAC MTB Michigan State Championship Series kicked off this past Sunday with a 2 lap Time Trial at Pontiac Lake. I awoke to cold, snowy and wet conditions. I must admit my motivation wasn't the greatest. I pressed on and kept thinking of what my brother said to me the night before, "It's going to be cold and snowy tomorrow. You will do great. You've been riding in the crap all winter." I rode out from the apartment with full winter layering. It was quiet as the snow covered my glasses and helmet. It seemed as if I was just out on another winter base training ride. As I closed in on the park I started to hear the familiar sounds of a race. The music and announcements over the PA and the chatter of fellow racers preparing for battle caused reality to set in. I quickly registered and continued with a light warm up. The next thing I knew I was lined up for the first race of the season. With the crazy conditions and over a dozen Elite riders showing up I really wasn't expecting much of a result. I rolled out from the line pretty conservatively trying to stay relaxed and upright. There would be no Big Ring Jammin' on this day as it was slick and quite muddy is spots. This was also my 2nd trail ride since Iceman and only my 2nd ride on the Quiring steel 29er race rig since the 2007 season finale. To my surprise I was picking off riders within a few minutes. I caught Dylan Lanspeary(A-Bikes) who is riding really well and knew if I could stay near him I'd be doing pretty well. That was the case going into lap two. We'd also caught Bill Clikeman(AC&F/WSC) who eventually found his wings on the 2nd lap and rode away from me. Dylan had some unfortunate chain trouble and disappeared behind me. I picked up the pace as I closed in on the finish and spotted Bill again. I just tried to ride smart, avoiding crashes and keeping Bill in my sights knowing he started a minute or so in front of me. A few minutes after I had finished I heard I'd posted the fastest lap time. Then, after a short cool down with Bill, I'd heard I won. I won! Finally. A much better result than last years season opener at PLRA. Funny thing is my lap times were nearly the same. In the mud! Another good day on my Quiring 29er. The Stans wheels worked flawlessly with a big o'l Geax up front and a Karma on the rear. It's so nice to be riding the Quiring and racing again. Spring is here everyone! Good luck and have a super fun and safe season. I'm looking forward to hanging out and sharing some Oberon's with you in the coming months. I got things started off with a 6 pack of the beauties following Sunday's race. See you at the races!Joberon 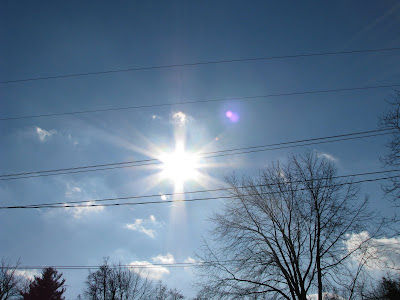 Congrats you two...hope to see everyone soon, it has been a LONG winter;0)

congrats you two...hope to see everyone soon, it's been a LONG winter;)0