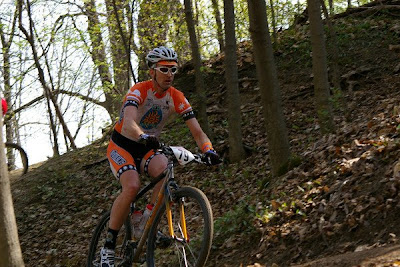 Jason Lummis attended the 2nd stop of the tailwind.net USAC series at Bloomer Park Rochester Mi. 16 racers lined up at the start of the Elite/Open class for a great day of racing, cool and sunny.

My first race of the 2008 race season is under my belt (skin suit). I had missed the 1st race of the year at Pontiac Lk due some nagging back pain. Our new team kits arrived this past Thursday from Pearl Izumi and they are awesome.

The race: It started out fast as usual with a slight down hill to first set of single track. I missed my pedal, which is odd since using CRANK Brothers over the last few seasons I had not done that before. I made way to 5th or 6th wheel and entered the tight and twisty single track behind a new face in the Elite class. Khuncapi grabbed the whole shot and Neil S. was right behind him, Brent and Dylan where just ahead of me. After the single track opened up I was able to get around the racer in front of me, he started way to fast and was fading with in the first few miles. We made it to the big downhill switch backs and I almost lost it because of not pre riding and the trail changed directions from previous years at the bottom. It was a fun change and I started closing the gap to the racers ahead. I closed the gap on the RR bed flat along the river. I sat on for a few and tried an attack on the little hill before the sled hill (which was cut out) and tried to keep the pace high. Coming around the infield by the start/finish Christian tanguy came by and Dylan grabbed his wheel leaving myself and Brent in the dust. We caught Kuhncapi and then dropped Brent in the same spot The flying Frenchman dropped me. Kuhncapi and I slowly reeled in Neil and dropped him as well on the 4th lap of 5. I had a small scare on lap 3 with a stick jabbing my rear wheel and the hissing sound of a flat. My Stans liquid quickly sealed the hole and I lost about 10psi, the tire held for the rest of the 2.5 laps. Christian was gone and Dylan had a gap that wasn't getting smaller. On the last lap Kuhncapi was fading and I jumped about 1 mile from the finish and held him off. Greg is a good friend and I really have fun racing with him, he and I have had a few good battles for position in races over the years. 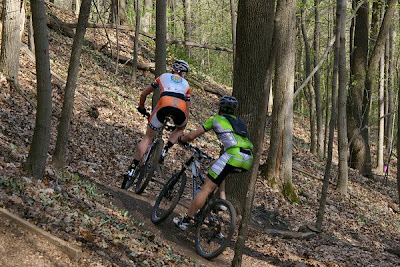