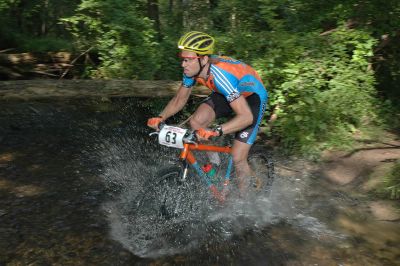 
Like Simonster I rolled with "The Double" race weekend. Same races except I was in the CAT3 group at the Maillot Jaune event. My second road race of the year. Besides some of the pavement being in tatters I have to say it was a great venue. The announcer was even speaking French for this very international crowd. Michigan, Ohio and...Ontario:) Like Mike, I was the only Bells Brew/Quiring Cycle rider in my group. I was hoping Lummis would join me in some road racing shenanigans but he and his lovely wife were at breast feeding training. Stay tuned for his report on that. I tried my hardest to get a breakaway brewing for most of the race. On the last lap I put a gap on the group and was sailing off on a solo breakaway. After a few minutes of killing myself I thought maybe I was in luck. Well, I thought wrong. One of the teams just pegged it and reeled me right back in. Almost immediately after that a rider from the West Coast team attacked and the group started to blow apart. I lost contact with a group of 8 or so guys and was dangling a ways back with 5 or 6 others. Of course most of them were representing others up the road so it was pretty much up to me to bring em' back. Once that job was done two more riders attacked with just a few miles to go. I worked my tail off to bridge. I though we had it. I was in the front coming into town and seemed to be hurting the other two guys. Unfortunately that group of 8 guys weren't too far back from them. They got us just before the line and I ended with 8th place and a heck of a workout. Sunday I was off to the Tailwinds Stony Creek Time Trial. I had no idea how I'd be feeling after racing the previous day. I warmed up for a bit then headed over to the start line. I thought I was the last guy to take off until The Simonster rolled up behind me. GREAT!~ I took off as hard as I could and tried not to think about the vicious beast that would be boring down on my shortly. Yes, he did eventually catch me but this time it just seemed to take a tad longer. Shortly after I caught a rider that had started ahead me. Then another. Realizing I was feeling pretty good I tried to hold my pace to the finish. Then...endo. I hit a log and face planted in the mud. I popped right back up and ran the next couple of muddy, wet, log sections. With a mile or so to go I put my head down, enjoyed the nice grass section of the course and pushed on to the finish. I ended in 5th place. My best Michigan MTB result this year. I was pretty happy. And you know what...it was all done on my super sweet pimpin' chick magnet QUIRING...TWENTY SIX INCH bike.

Yo Joe,
Wish I could have joined you up at the Maillot Jaune tearing up the 3's but I was too busy stuffing my face with food. Good job over the weekend. You raise those bars yet?