The Start of the Lumberjack 100, Jason Lummis off to the right with an early jump :>) 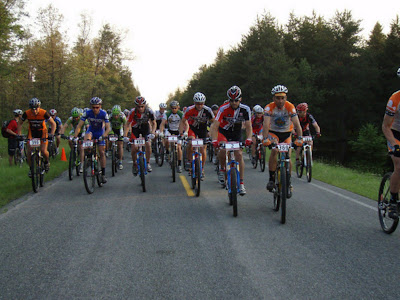 The mud section after the water sections. 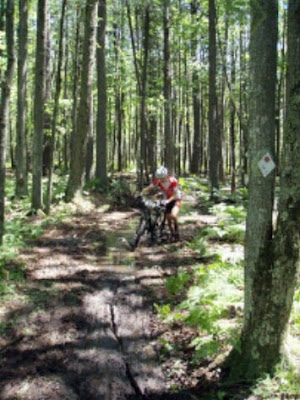 John Meyers hoofing in the top 3 on the first climb at the start....

John in the top 3 back on the bike. 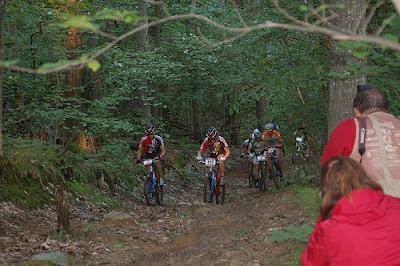 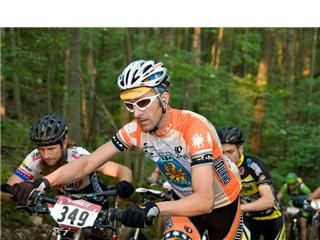 Jason and John raced the lumerjack 100 this past saturday, start time 7am. The weather was perfect and the racing friends where ready for a long day in the saddle. Jason jumped to the back of the leadout vehicle for a 30mph warm for the 2 mile road leadout section before the trail. Everyone joined him a mile later as they entered the BIG M parking lot. John Meyers moved with the leaders as the hit the first hill. AND the rest was a long day.
Race reports soon, results link below.

BREAK #1:
This first break took place as Jason peeled away with the van and the balance chased, as we approached the turn in to the parking lot the trek SIMONSTER decides to spool it up a bit, I remained in his slip stream as we rolled off the payment and up to the first climb, his teammate and eventual winner jump-up as we hit the low loose steep section, I was feeling great and climbing is FAV of mine so all is good, somewhere in the next ten feet Harlen shoots across in front of me and bobbles, damm, time to jump and run...back on and over the top in 3rd..yeah....basically the first lap consisted of the 7 - 8 rider break, we hit the swamp with no clue and all rode until the very last section and than ran helter skelter looking for the trail, the Simonster lead the way(pre-rode the day before) and we all made it thru the first lap...I move up and was sitting in 6th. damm! feeling great!

Second lap was good kept a nice temp with the concern to keep my heart rate down in the 160's so that I could maintain what I was consuming and no blow-up for the following two laps, at about 8 miles to go in the lap I roll up on the Simonster...strange...I am not having a peak day just a good day but what's up with Mike? hey the 14,000 feet will wear you down, so no problem, I am 100% rolling with Mike, stay positive, keep Mike positive, great, all is good, so at about 2 miles to go in the lap we roll up to the final climb in the lap and I shift down and go for granny....mistake jambed chain....off the bike try and free it up...no go...shift back to middle ring looks like things are o.k. jump on pedal BREAK#@2...DAMM!...day is over no I decide the start finish is close enough to run in and make a repair or grab a new chain, I make into the start finish with may riders going by, chain fixed back on the course, lap 3 was all about raging back and trying to catch the riders that went by, in the lap 3 I grabbed up Greg Kuhn and Garth Prosser(former sobe cannondale teammate) and told them we must push on, half way into the lap I roll up on Jason, I tell him get on board let's all roll this together, Jason was at a low point looking for a CocaCola for a boost, Jason pulled it back together and finished in fine form, we kept her going for the fourth lap, Garth did 90% of the the tempo work, we stopped for some delicious CocaCola at the outer loop aid station...a little caffeine to get thru the final 13 miles, Garth did a great job, great tempo and in we came to the finish in 9th and 10th geared!!! We finished the afternoon with some fine catered food at the start finish and off to the awards for a little celebrating.....A big, big, big, big THANK YOU goes out to the man Scott Quiring for great accommodations at Camp David on Hamlin lake and the spot on crewing in the transitions!!!! Additionally to Lummis for the driving up to the race and drive to camp David....damm how did we make with all the road closers and deep wash outs? Also to the great sponsors for providing the best equipment and beer to do what we love best....Race our Bikes!!!

Notes: Lot's of water over the road and trail, passing over a a dead skunk discharging at 60 mph....ouch....burn....windows down please Jason, #139 = a free hot shower, icey cold bells beer, custom lite ti-carbon Quiring 29ers are a NUE 100 miler secret!
and free Hot showers!
Jason:
At long last my Lumberjack race----- Going into this race I was thinking I really was going to make an effort to stay focused the whole way. There is usually a 30 mile section of a hundred race that I lose concentration and let the fatigue and pain take over. I might just want to lay down for good or just go home during this time. I usually come around and start to have fun, by the end I just want a cool Bells Brew and some good food.
This year I jumped to the back of the leadout van for a nice little 25-30mph wind up/ warm up for the start of the 2 mile paved road roll out. It was fun to look back as Shualck, Simonster, Eatough and 30 other fast guys sprinting to catch me. This set me up for a nice roll in to the parking lot in the top 10 feeling relaxed. We hit the first climb as I dismounted with everyone except the top 2. I moved up thru the pack and just missed the lead group at the top. I eventually passed a few guys and was 30 secs back from the lead group that was being pushed by The Simonster. Dropped my water bottle, stopped and retrieved it, as jumped back on the seat it slips forward and down. With 4 miles left to where Q is waiting for me with a feed bottle I decide to ride to him and work on my post with an extra hand. Has i got going again the second group caught me for the beginning of the outer loop, which is flat and with a slight down grade. I pushed through and around the second group to no mans land again, 2-3 minutes down from the riders ahead. I kept this pace for the next 40 miles. Then Garth caught me and dropped me. I caught him at the beginning of the 3rd lap outer loop and dropped him. Then it hit me --I had been drinking and eating well, I just believe the mental fatigue set in and I lost all motivation to push hard. Then my teammate towing 2 guys catches me and rides easily away as I want to just lie down. I pushed on into the final lap, as I hear The Farmer yell out from behind on the inner loop I feel like I need to push the pace and get him from pacing off me. Nate catches me just before the Aid station and I say "see you soon", as I stop for a few last lap Cokes. I catch Nate in swap and run up to him. We then ride for awhile together thru the flat sections, but Nate drops off with leg cramps on the hills. As we hit 15 or so to go I feel some sugar rushes from the Coke and up the pace into a gradual climb that rolls into a grinder of a climb. I get a small gap on nate as I weave between a few lapped racers and as we hit the long grinder I jump to drop Nate. Probably 10' later while in the Big ring out of the saddle my left pedal strikes a stump throwing me to the ground. I just remember coming to on the ground with 2 guys standing over, I guess I came to standing throwing punches from what Nate said. Nate also said I was laid out for 10 secs. My rear wheel was blown out of the drops and all I wanted to do was finish. Nate wanted me to hangout for awhile, but the race was still on and I didn't have anything broken. I thought there was just a mile left as I tore off, but actually 10 where still ahead. The Farmer rolled up laughing asking if I was OK ! I was except for a stiffening neck and sore ribs. Nate was a real good person with his concern, but he had a huge 40/26 ss gear and the trail kept going up. I spun my way to a nice gap over Nate and even scored some Chiropractic work after the race to stretch things out nicely to heal. 13th overall and about 16 minutes slower than I planned. Oberons, Two hearted and Big Porch tasted great after the after race shower booting.
The ribs are still sore, so I put the White Bros fork on for Stoner Creek Marathon.
---LUMMIS
Posted by Quiring MTB Team at 12:53 PM