The start of the mens Elite XC 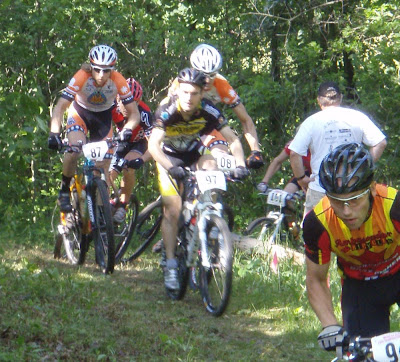 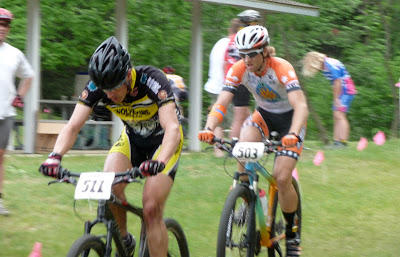 Ugh!! That was a tough weekend. I'm always pushing for more people and competition to show up at the MTB races. Well, it seems I'm getting my wish. In addition, the quality of the field just keeps improving. To crack a top 5 is no small task. The Tailwind USAC Brighton Stage Race consisted of a Time Trial and grueling Short Track on Saturday. Sunday the weekend is topped off with a Cross Country race. Besides mass quantities of suffering it's really a swell weekend and venue. I was very pleased with how things went for me on Saturday. I managed 4th in the Time Trial on a trail that doesn't really suit me. Very tight and twisty. First place, Christian Tanguy(American Cycle & Fit), had a sizeable gap on the field but many of us were left in a close battle leading up to the afternoon Short Track event. The few hours between races went by quickly. After a bit of rest and some great food prepared by Erin's parents we found ourselves lining up once again for more pain. The Short Track took place within the large grassy picnic area of the park. The entire 20 minutes of racing was on power zapping energy sucking grass. The event was a drag race. I was able to hold on to the leaders for about a lap and a half(of 8). Eventually I popped and was dangling out it the wind. Bill Clikeman(American Cycle & Fit) reeled me in and immediately passed. I did everything I could to stay on his wheel. I was hoping I could recover and go around but he hammered out the remaining laps dragging me to the finish in 5th. Not bad. I ended up losing a small bit of time on a few but putting time into others. In the end, it was still a close battle for the overall spots. SUNDAY! SUNDAY! SUNDAY! Bring on the heat! High temps and some close competitive racing were on the menu. After some pretty good legs on Saturday I was feeling confident going into the XC. My on form teammate Jason Lummis was in attendance with some peppy legs to lend a hand for the overall. He says he started "slow" but I think it's the fastest I've ever seen him go! I think he was showing off for his Dad and cute as a button son Zack. Jason lead us into the first greasy wet lap. On his wheel was a hard charging Dylan Lanspeary(A-Bikes.com) then me. I was stoked with my position and felt fairly comfortable. I was braking a lot going into the sloppy corners which started to create gaps. I'd chase back on only to fall back off the lead two in the next slick right hander. Half a lap later Christian flew by me and I found myself in no mans land again. As I started the second 8mile lap(of 5) a strong group of chasers caught me. After one lap in the heat we all looked as if we'd been racing for hours. Team Specialized rider Michael Wissink was in our group and started crunching numbers. He said, "we have 4 more laps. We're going to be out here for 3hrs." He was right! I had done one lap, felt like I was going backwards and was just informed I/we have another 2.5hrs of racing left. Ugh! over the next lap or two Randy Laprairie(Macomb Bike) would attack. Then Jamie Parker(Specialized). I had nothing. The moves were made and I couldn't react. I could only watch as they rode away. Leaving me alone with Jamie's teammate Michael. Who, by the way, was ahead of me in the overall. I went through many moments of suffering and frustration. Late in the 3rd lap I started to regain my composure. I accepted the fact that there would be not attacking and I had, what felt like, no power. I just found the most comfy gear possible and worked on trying to get the sufferfest over with ASAP. Thankfully my parents and friend Ginny were there for feeds. Keeping fed and hydrated were so important this day. Somehow I started to put a little space between myself and Michael going into the 4th lap. I felt like I was riding like a slug. In the end everyone was due to the heat. I started lapping Expert riders and could see they were suffering. I was passing riders quickly and realized I wasn't going too poorly. One more cold drink feed from Mom and I was finally off on my last lap. Avoiding incident I was able to finish fairly strong and even put a little time into Michael to take 6th in the XC and 5th overall in the stage race. A great weekend of racing for the Bell's Brewery/Quiring Cycles Team. We all made the podium and even had two wins. Congrats to everyone how raced. It was a heated slugfest out there. Thanks again to our parents who really helped us out this weekend. See you at the next one. In the meantime, I'll be busy recovering.
Joberon
Erin Vicary: 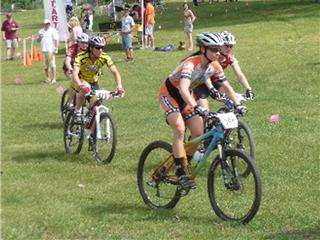 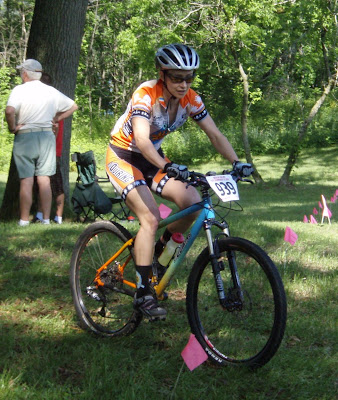 Living only an hour from the Brighton Rec Stage Race venue, along with having a 12:00 start, afforded Joe & I the luxury of sleeping in & cooking up a great breakfast at home. Combine that with our (parents & friends) cheering section, some kick’n coffee & a good warm up - we were set up to succeed. To kick off the weekend on Saturday we had the TT on the Torn Shirt Trail. Torn Shirt is a very twisted, overgrown, narrow, 6 mile single track loop with some steep, rooty, digger climbs. Almost never did it allow for sitting still on the saddle. I was constantly moving, shifting, & leaning to get around corners or up & over obstacles. Quite fun! At the TT start each racer was sent into the woods in 30 second increments. I happened to be starting 30 seconds after Kerry Collins (Team Giant Michigan), my main competition that showed for the stage race. It took about a mile and a half before I closed the gap between us. Then continuing on I grew a 1min40 lead through to the finish. I suspected I might need a time cushion because next up on the day was an entirely grass, 95% flat Short Track course more suited to my closest competitors strengths. Whether my foresight was based in psychic ability or just plain old realism, i don’t know, but my prediction for ST (unfortunately) came true. After trading pulls the first two laps, Kerry made an attack & bridged up to some expert men on the course with us. I tried to answer & found I did not have the legs to follow. I started to shut down a bit due to the hard start, direct sun, 95 degree temps, & very high humidity. I soon realized survival mode had kicked in & my parents, who came out to watch, were going to see their daughter unravel into a pile of goo. I swear I could have fried an egg on my head when I finally crossed the finish line in 2nd about 1min10 back from 1st. Do the math...& I still had a 30 second lead overall to start Sunday’s cross country race. It stormed very hard Saturday night leaving the 8 mile Murray Lake XC trail loop pretty greasy & wet for the XC race. That morning I decided strategy, with my 30 second lead & my bodies horrible reaction to the previous days ST race, I was just going to play defense on the first of the four laps to see how I felt. Kerry took the hole shot (be my guest) & lead the string of us ladies out & into the single track. After a mile the noises behind me faded & I knew it was just her and I alone at the front. Kerry’s game plan became apparent at the first sign of an open straight away: Out of the saddle, hammer, & try to drop me. I answered her attack as soon as it happened & she didn’t gain an inch. We continued along on the winding trail finding it damp & very slick in the corners. Now, not nearly as flowy as it had been in my pre ride. The air in the woods was not moving at all. The humidity & temperature seemed to rise with every pedal stroke, but at least the trees provided some shade. Then ahead I saw another straight away, gradual climb... get ready I told myself. She attacked again & I followed without hesitation. I knew for certain then that I was racing with my good set of legs :o) &  got very excited! Still I knew it would be a long one so I stayed patient. One more attack answered from Kerry, same exact scenario as the first two. Then with a few miles remaining in the first lap she dropped her chain, I went around, & never saw her again. When I popped out of the woods, heading for the lap chute, I heard Joe’s parents cheering & saw our friend Ginny holding an ice cold bottle for me! 1 lap down, 3 to go! The 2nd lap I concentrated on catching the expert men that started in the waves ahead. I managed to catch around 10 or so which kept it interesting. The third & fourth lap weren’t as arduous as I thought they might be because I kept the fluids coming & the trail was drying out fast making for a really fun ride! I kept an honest, steady pace through to the finish line & felt GREAT about my ride, finishing almost 5 min ahead of 2nd place! Thanks to Joe’s parents, my parents (& their friends Donna & Michael), Ginny, & everyone else that cheered us on all weekend! It really helped! Congrats to my awesome teammates on their great results! I’m very proud of you guys :o)! Next up- Stony Creek Marathon!