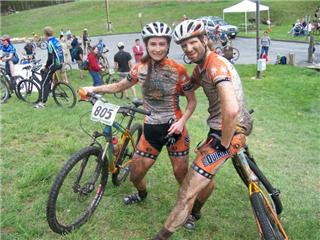 Joe and Erin Headed down to The Green Brier AMBC in Maryland this past weekend. Erin won her Expert class while Joe battled it out with the Semi-Pro class for a hard earned 12th. Race report and Pics below.


Great job guys and not a bad way to break in the new team kits..... 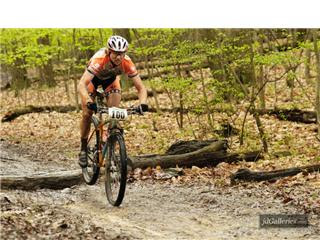 Greenbrier Challenge AMBC, Boonsboro, MD. Erin and I, along with the Simonsters(Trek Midwest), made the marathon journey to Maryland this past weekend for the Greenbrier Challenge. In an effort to qualify for Nationals and improve our technical ridingskills for Mt. Snow in July we decided the long drive was justified. In the end we were in the car about 15 hours and on the bike 3. Including Saturdays pre ride and Sundays race. Yeah, not a good balance I agree.We do, however, think the trip was worth it. The course was fantastic and the event was run really well. The turn out was large and the competition was stiff. Saturday night brought torrential downpours to this lush very hilly region. This was only going to make an alreadytechnical course twice the challenge for race day. With me taking my first crack at the Semi-Pro's and Erin rollin' Expert we didn't start racing until 2PM. My hope was that this would allow for the course to dry up a bit. As we were preparing for our event we could see that wasn't the case. Beginner and Sport riders were coming off the trailsoaking wet and covered from head to toe in mud. A good test for sweet new Quiring bikes and slick new team kits I suppose. I rolled up to the line after a nice warm up with Mike and Erin. In front of my Semi-Pro group were the Pro men. I was surrounded by fierce, lean and mean looking athletes. I wasn't sure what to expect besides pain. A minute after the Pro men launched our group was off and immediately up a longclimb. Long for a Michigander anyway. The start was very fast and the pressure was on the entire first lap of four. I held my own on the climb then things started to get interesting. The entire 5 mile loop is quite technical. Which is one thing going up. But when you're screaming down a hill...it's an entirely different story. Rocks, roots, logs, muck. This course has it all. I struggled a bit but kept it upright not allowing too many passes. I survived the first lap and had a couple riders in my sights going into lap two. I was hovering around the top 10. I was trying to find some sort of rhythm and not blow up. On a course like this that can be quite a task. For all of lap two I tried to stay within reach of the couple Semi-Pro's ahead. There was basically zero recovery on this course therefore I didn't feel I had the power to chase. I could only hold my pace and hope for the best. Lap three I felt a little more fluid and smooth. I was able to catch a few riders but still didn't have the legs to really dig. Rounding the start/finish for the fourth and final lap the fatigue was setting in. Every section of trail worked me over. Especially due to the rain and wet conditions. I didn't panic. Just put it in cruise control not redlining even once. I cleaned the last rocky down hill better than I had in the laps prior and rolled across the line in 12th. I wanted to crack the top ten but it wasn't meant to be. Overall I'm satisfied with my performance and ability to ride the tricky stuff. It really makes MTB racin' around here feel like a road race. Erin ended up having a fantastic race winning her class and having the 2nd fastest Expert Woman time on the day. Way to go Erin! Way to go Bell's Brewery/Quiring Cycles MTB Squad. Another successful racing weekend down the hatch. See you at the next one. 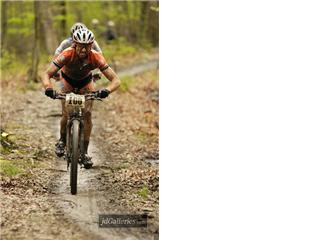 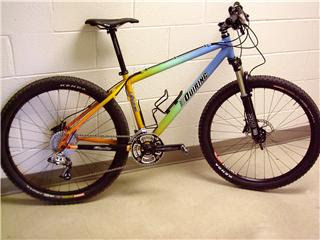 We started the 8 hour drive to Frederick,MD at 8am Saturday morning. On the Ohio turnpike, we bridged up to & continued caravanning with the Simonsters the rest of the way to Maryland. The drive went well, as did the 2 lap pre ride, because the darkening sky’s held out until we were done with both. Later that evening, Mike, Mitch, Joe & I got cleaned up & went to a local steak house for dinner. In the midst of conversation, I happened to notice water streaming from the ceiling in a few spots...hmmm. I looked out the window to find it raining as hard as rain can possibly fall. Instantly my mind started flashing images of how the trail would look for the race. Like little glimpses into the future, I saw everything I’d seen earlier but it was all wet & covered in mud. Normally I would’ve started to freak out a bit, but not this time... ‘cuz I’ve got the new machine with me! My beautiful Quiring equipped w/(amongst other wonderful amenities) DISC BRAKES! Disc brakes you say? What’s all the excitement?! I’ve never had them until now & I after this weekend I will never be without them again! Sunday morning was centered around coffee, food, & killing time until our 2pm race start. Joe & I ate a leisurely “...down on the farm” breakfast & afterwards enjoyed the headache that is U-Scan at the local grosh. Then before we knew it, it was check out, load up, drive, arrive, packet pickup, chill, people watch, prepare bottles, dress, warm-up... ahhhh yes... The Race: The Fun! I’ve only done it a handful of times, but I love racing against unfamiliar faces in unfamiliar places. Outside the bubble of the Michigan scene there is much to see! The Greenbrier terrain was awesome! It was just as I’d envisioned the night before... VERY WET & VERY MUDDY. It’s about a 5.5 mile course & if I had to guess I’d say there was 65-70% climbing & 35-30% downhill. Not much of anything in between really. Thank goodness for my super light ZTR RACE wheels from Stan’s notubes.com. Those long climbs wouldn't have gone as well as they did if those wheels weren't as light air. Both ways, up & down, were quite technical. The trail absolutely littered with rocks, slick water bars & logs, a river crossing, & even some roots thrown in for good measure. Then there was the mud pits, the puddles, & the small river that had formed on the last downhill section. It kind of highlighted the best line to take so it actually helped! Being so used to the trails at home, all hard packed & highway-like, it all appeared quite treacherous... but in a fun way. I managed to only bobble a couple times & most of the time I just ate it all up. Lots of people were slowed down or sidelined with mechanical. The only issue I had was some crummy shifting on the last lap due to massive mud.... no biggy.As far as the competition within the experience, in the Women's Expert Master 30-39 class I never saw any of them after the start & finished 3+ minutes ahead of 2nd Place. Afterwards we cleaned the bikes,dunked ourselves in the lake, did the podium, grabbed a medal, & @ 6:00pm Sunday night the next race began.... the race to get home for work in the morning :oP. Good times! 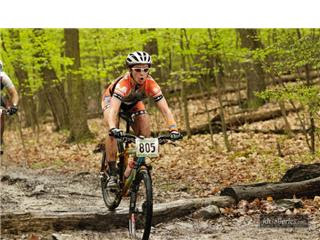 great job guys, and great report, I feel like I was there without all the blood guts and tears.

For more Photos of Joeberon, see his sister's blog at: