Joberon and Jason L. attended the Addison Oaks fall Classic this past sunday for a little XC racing. Read the race reports below: Joe finished 3rd while Jason was 4th out of 14 starters in the Elite Open field. 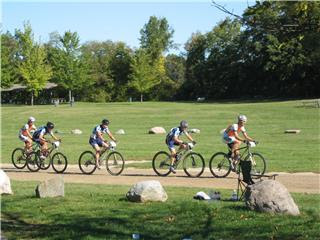 Addison Oaks was one of the first mountain bike races I competed in. Over the years it has changed so much and made huge improvements thanks to Pauly and the folks at O.C. Parks. I don't get out there often but it's always a nice late MTB season event. Pretty low pressure. Lots of guys are gearing up for CX or just knackered from a long season of racing. That's the cool thing about Addison, even if you're worn out it's still a great time. It's like a rollercoaster. Going into the event I knew Christian(American Cycle and Fit) and all the KLM lads would be the one's to watch. It's their turf and they were looking for good results. In the end the race ended up being quite the battle. One of the more exciting races of the season. It started with Christian on point leading the charge up the climb. I was about 3rd or 4th wheel. We rounded a bend and a hurried expert rider was flying down the hill back towards the start. Obviously his warm up took longer than expected. Thankfully all riders avoided him and we were able to continue. Wow! Then, moments later, we crested the top of the climb and a CAR was driving across our path. Crazy! Must have been a park employee or something. Thankfully we all avoided incident there too. We eventually made it into the sweet single track. That's when both Christian and Chris of KLM started to gap the group. They were flying through the twisty stuff and I was left to chase. With two other KLM guys and my teammate Jason in town I was working to bring back the leaders. Eventually I started getting close to Chris and Christian was, as expected, out of sight. I would bring Chris back on the open sections then he would gap me in the single..trail. We reached the start/finish area for lap 2 of 5 and I had gotten back to Chris. Myself, Chris, Jason B., Greg of KLM and, thankfully, my teammate Jason. Off we went. The 3 KLM riders kept hitting us and making us work the entire race. It was hard work but good fun. Especially as I was able to bridge each time an attack was made. Going into lap 4 my teammate Jason attacked going up the start climb. I was off the back as I had just grabbed a water bottle. As I rode back to the guys I could see Jason B. struggling a bit. Chris was gone and Greg was looking good on my teammates wheel. Eventually Greg attacked and I grabbed his wheel as the others faded. He kept the pace high through the tight stuff and I started to lose him. Going into the final lap Greg was about 15 seconds up. Atop the start climb I saw dust in the air and new I was gaining. Eventually I realed him in and was ready for the fight for the 2nd spot. The trail opened up to two track and I went to the front. Made a left onto a climb and I hit the gas in what was to be an attempt to shake Greg. Well, I shook him alright. With my head down and no real visible courses markings I blew right by a turn and went the wrong way. Thanks to Greg for yelling. I turned around and tried to chase again. BLAHHH. I was getting tired. I ended up slowing again at another intersection as I was worried I'd made another mistake. With only a couple miles to chase back Greg was out of sight. Damn! I was riding over my head through some tight single track and clobbered my shoulder on a tree. At that point I put it in cruise control and rode in for the 3rd spot. It was a great race. I felt great. I'm just bummed I couldn't have raced it out till the end. The fun was cut a bit short. Oh well. Great ride everybody!

Father/ son and son day. My Dad and my son went to the race with me today and then we headed over to the UCI CX race to yell at the Crossers.

I haven't been to Addison "joke" as we used to call since 2001, it's not a joke anymore. Pauly sure has taken care of the place and I only recognized the start finish area as we headed out for 5 laps with no pre ride..... Fast open slightly down hill start and we where off dodging a racer going backwards and a mini van up the first Hill. I guess that's what ya get at a Oakland County race. The KLM crew was trying to control things as Goddard was off behind Christian. I was trying to memorize the trail and hang on to Joberons pace, it seemed that they needed a little better markings as the course popped in out of single track and 2 tracks. Joberon brought all back together by the end of the 2nd lap. I was still trying figure out the trail, with the KLM crew knowing the single track well it was a tough day holding pace thru the tight stuff. I think I clipped a pedal on every lap. Going into lap four Goddard was looking hurt and his Teammate Jason was taking it easy on the flats, so I attacked to see what was going to happen with 2 of the 3 KLM guys knowing Kuhncappi was feeling pretty good. I eased up a little and Kuhn came around and I gave him another attack and he came around again with Joberon and we hit the single track again. Goddard and Jason B. came back as well, so I just slowed down and let Joe and Kuhn fight it out. I am not sure if the other 2 saw what happened but we lost Goddard. Final lap Jason vs Jason I set pace for awhile until; Jason came thru and I could see he was losing power and Joberon/Kuhn where gone. I waited till the last wide open long dirt 2 track before the start finish turn and jumped--- looked over at Jason and new I had it, I had about 100yds before the final corner---- take the inside of the corner to the outside and sprint about 150ft to the line for 4th.
Posted by Quiring MTB Team at 9:54 AM