Stony Creek Metro Park...'Stony Baloney'.... 'Stoner Creek'... the wonderful park we off road cyclists have the opportunity to race at what seems like every other weekend throughout the season. There's the Stony Creek TT, Stony Creek Marathon, Stony Creek XC, 6/12 hrs of Stony Creek, Stony Creek Cyclocross... Out of the 5 races I've done in the last month & a half 2 have been there....lol. I'm not complaining because I really like Stony...this is just an observation I've made. The only time I ride there really is for races so it's funny to me how well I've gotten to know the course over the years just from that.
So, without a pre-ride or a warm-up I took to the line this past Sunday to battle it out @ Stony once again along side 4 other expert/elite women in Tailwind's final XC race of the season. I didn't do a proper warm up because the race was going to be 2.5 hrs & I didn't know if I'd be able to even finish trying to ride at 'race pace' for that long. My plan was to pray that no one started terribly hard & just get warmed up while I was racing to conserve energy and that's kinda what happened :o). Melissa Mabry (Precision MTB.com) took the lead at the start, with Marne Smiley (Scott Bikes/Ollett Coaching), myself, Dana Baurhenn (Wolverine/ACFstores.com), & Heather Patterson (Dark Horse Racing) following behind in a group. Melissa stayed on the front for at least the first 10 minutes & then I jumped up front to take a turn. I think everyone was still together at this point but I'm not sure how long that lasted as eventually behind me I heard Marne ask to 'get by' someone & the next time I checked it was just Marne & I. And that's how it stayed until the beginning of the 4th and final lap. Marne & I had an absolute BALL ripping around that trail in unison. I don't think either of us were trying to break our necks because we were just having too much fun riding together. I for one was pleased that I was actually able to ride with her... something I wasn't counting on at all because I know she's getting fast for her upcoming cyclocross season. SO round and round Stony we rode together until the beginning of last lap when Marne laid it down RIGHT in front of me going into a loose, 90 degree right turn coming off the two track heading back into the single track. I slammed on the brakes with my front tire barely making contact & managed to stay completely upright. Marne popped up, shook it off, checked her handlebars, & put her chain back on. She said she was alright & ready to go so I scooted in front of her, looked back to make sure she was ready & we were off again. After a couple minutes I didn't hear her behind me anymore (& afterwards I found out that her chain fell off again right away so she had to stop.). So I was missing my buddy but reminded myself it was a RACE...lol... & I should press on before someone caught me lollygagging. Being my final lap I decided it would be a good time to test what I had left in the tank after riding 2hrs. I ended up having more left than I would've thought & started catching & passing some of the Expert men. I was so pleased with everything at that point... the fun trail, racing with my friend, feeling strong,etc that NOTHING could've wiped the smile off my face. From what I can tell looking at photos Andrea Tucker (www.tuckerbikes.com) & Hans Nyberg (www.tenmilemedia.smugmug.com) took... looks like I may have been grinning ear to ear pretty much the whole race. 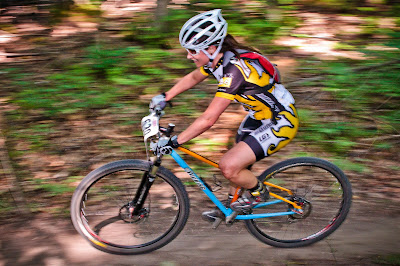 And the smile just got bigger the closer I got to the finish line until I finally crossed it for the win :o)!

Of course my teammate & friend Jason Lummis was not far from my mind during the race & he served as inspiration for sure. I noticed there was quite a bit of Bell's flair going on @ Stony in his honor. People wearing Bell's jerseys in lieu of their team kit, buttons, etc. .. really nice to see the support for Jason! One racer in particular, an expert/elite woman (whom shall remain nameless because I'm sure she didn't do it expecting to get a shout out), approached me after awards while I was by myself & on the phone. She handed me the cash filled envelope she received from being on the podium & whispered that she was giving it to me to pass on to Jason & his family. I was so touched my eyes welled up with tears (as they are right now typing this), I said thank you & hugged her. So yeah... thank you again to everyone who has shown support in one way or another for Jason. Our little bike racing community in Michigan... we have something very special here ;o).

Really great to see that you are racing again, Erin!!!
Janet

Thanks so much Janet :o)!
Now we've just gotta get you healthy & back out there! I hope you are feeling better.