This past weekend in Ann Arbor Tailwinds put on a 2 day Cyclocross race at Vets Park aka "The Devils Soup Bowl".

Saturday had Jason Lummis racing masters 35+ and the Simonster/ Joberon duo in the Big Show the "A" race. Jason finished 5th, Mike finished 4th after battling out the 1 hour contest to succumb to some bike issues on the last lap and Joberon ragged the race after having to go back to the car after 2 laps to air up the skinnies.

Sunday had Jason Lummis as the only Bells rider to make it for the race. Jason did a little better and finished 3rd. 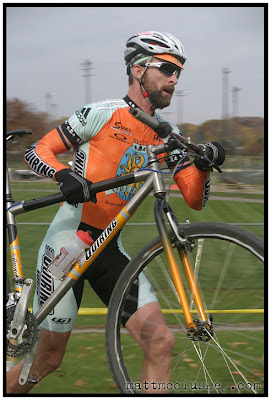 Wow what a great weekend in SE MI. I decided to do the CX race on saturday to get a hard effort in before the Iceman the following weekend. Ann Arbor Vets Park is about 17 miles from my house, so I commuted to the race. This turned out to be a good idea as I was warmed before getting the Masters 35+ race (45 minutes of CX racing). I was having troubles getting my number pinned on before the race and looked over at the start and eveyone was lined up. I rushed over and was a the back of the start and we where off. The first few laps where tuff to move up on, but I finaly made it near the front as we hit a short hill that everyone was stalling on. I pushed my way thru and ended up hooking bars with a rider and he went down unhappily. After this a group of 5-6 us was off the front for the rest of the race. Jamie Parker a MTB racer buddy was out having fun as well. I attacked a few times and tried to get Jamie off the front to make the regular CX guys work some more. Going into the last lap I was on the front pushing hard and on the 1st set of barriers I over jumped my saddle and almost went down. A small gapped formed to the leading 3 and I missed the gap as the rider in front of me absolutley blocked me and died. I battled with B Mitchell the rest of the last lap and he got me a an inch in the end. The Two Wheel Tango guys had some local brew from Dexters Jolly Pumpkin and drank a few on the run up hill and yelled at the A racers. Fun day and I was going to come back for Sunday for sure. Luckily my and son came down to Ann Arbot and I was able to get my bike in the car with all the groceries.
Sunday I figured would be better I had a grasp on who to watch and I was off for the commute to Ann Arbor again. This worked again as I was feeling nice and warmed up before the race again. I didn't miss the line up and was second row. Don Cameron was racing masters with us today and he has one huge motor on a very lite bike. Off we went and Don was gone. I sat in 6th wheel watching him put 30 secs on us before a half lap was done (Don go back to the A's). The course was backwards this time and as we hit a small climb everyone accelerated shreadding the field. Thru the run up barriers and up the hill Simon Bailey attacked and I wasn't going to get gapped from the front this time, I made the jump. We had 15 secs over the next 2 chasers and I kept the power on to maintain the gap. Except every time up the steep hill Simon continually attacked and I would respond and he would slow and I would pull us around until the hill again (note to self no free ride for Simon anymore). Last lap we have the gap Don is winning easily and Simon gaps me over the climb and I don't respond. Iceman this weekend then 2 more CX races in the Tailwind series. 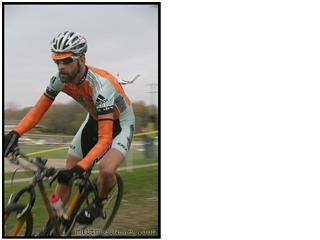 I am running Stans Ztr rims, tubeless with IRC mythos 42c CX tires. They rolled well, cornered awsome and at 28 psi where comfy. The Oakleys are untouchable in performance. 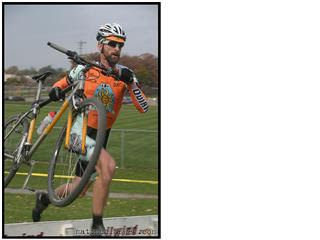 Posted by Quiring MTB Team at 6:49 AM