Double - Race Weekend!Peak to Peak, Crystal Mountain, Thompsonsville, Mi. Saturday October 20th. elite 4th Place It's had been since 1994 since i last raced at crystal mtn. the race was cancelled after that year by management. I remember that race clearly because that was my first elite race win! I had high hopes of repeating the 1994 win but that all changed during the first lap of the 33 mile race. About half way into the first lap sitting in second place and eventually missing a turn and continuing for what seemed like a mile to a deadend with the bulk of the elite field following I realized that the few that had yeld wrong turn were correct! The next 2 1/2 of laps were full tilt chase mode to see just whom had not made the same mistake. Several riders were passed but it seemed so confussing not really knowing who was still up front. There were three to four of us for most of these last 2 laps with a little work from one rider Dan Jansen at the flat road section and part of the two track start. I eventually became frustrated in the last climb as Danjumped past me just as we hit the false flat at the top of the final ski hill climb. I desended and chased but could not regain his wheel. Not knowing were I was at the finish thinking possibly SECOND but only to find out that I was FOURTH. A tad bit confused and frustrated! The race director did his best to communicate and discuss this problem and will be comping a free entry to next years race. It was nice to return to such a great venue and ride on a trail that has not been beat down.....overridden and pre-ridden to death. Long live riding a race course that is not broken in and only ridden the day of with out an advantage for pre-riding. So what's up with all the pre-riding of the sooooo techinical iceman course???? Again and Again! Leave it alone! I remember the days when the moto ripped thru for the very first time with the leaders following. No lines, leaves and snow still covering the entire trail. The leaders were just going for it.....knowing the lead moto was their guide for the best lines cut thru the virgin leaves on the trail to the finish line! 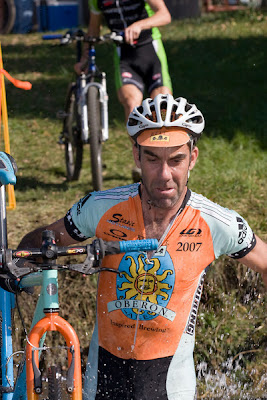 KissCross # 4, Cannosburg Ski Area, Grand Rapids, Mi., October 21st. 5th place "A" Two days in a row of racing? Just a little build up for the upcoming iceman race and a rest weekend following. The race started fast and furious with the speedy Steve Howard gapping us over the first climb. My legs felt a tad bit tired and I settled into third place. Going into the second lap I decided to not take the option around the stream crossing and plunged down in and was able to roll in and out no problem except for the heavy foot feeling with my water logged shoes. I created a problem and i was loosing contact with second place. Lot's of fun and craziness after the race. Watching the bike toss and enjoying the flav of the day founders IPA. Thanks again Rick http://www.kisscross.com/index.htm great race course and sooooo inexpensive $15....food and brew.....I am regaining my love for the sport of Cyclocross race by race. 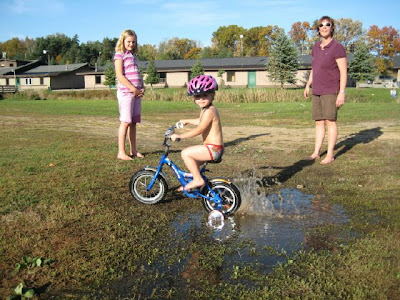