Mike Simonson made the trip out east to Vermont for the 1 day national championships. Mike races in the Pro class and placed a great 23rd in the XC and a awesome 13th in the STXC. 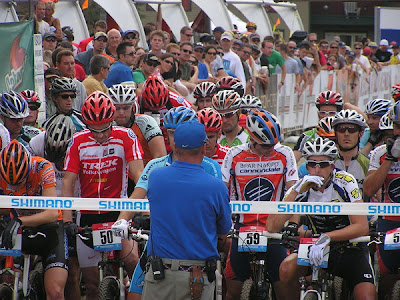 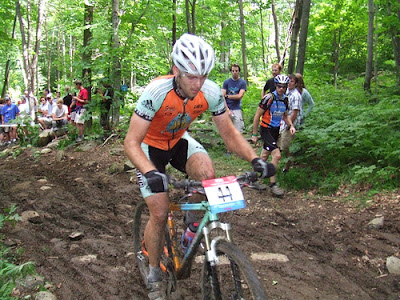 Vermont was quite an experience. Rain in the forecast turned an already tough course into a really tough course. We don't have stuff like this to ride in Michigan. Covering Boyne with a half inch of mud and sharp 24" diameter rocks might get you in the ball park. I started the XC race with about 60 other pro's from all around the country including Ryan Trebon, Adam Craig, JHK, Jeremiah Bishop and a host of other insanely fast pro's. My call up was surprisingly right in the middle. We took off and by the time I got around the first corner, I looked up the mountain and Trebon was already half way up it!! Oh well, I continued to work hard on the first climb and worked my way up into the low teens. I was with Carl Dekker and Eric Tonkin up the first climb. Sure enough, as soon as the trail started going back down the mountain, about 20 guys went blowing by me... BAHH!! Frustrating to say the least. The race kind of went like this most of the way. I'd pass 5 guys on the climbs, then two would blow by on the decent. On the 4th lap, I managed to hold off the trailers on the downhill and nobody passed me. Maybe they were tired, or maybe I was just starting to get the hang of how to ride the downhills. I rolled in at 23rd spot. 3 spots shy of my top twenty goal. The STXC was more my style. Pure fitness and power. I think the STXC tells a person more about where their fitness level is on the National level. The XC course combines fitness with more downhill agility. None the less, they are both tough. I got called up dead last in the back row! It's always a mystery on how the call ups are negotiated. Ya never know where you're going to get called up at. They yelled go and before I got across the line, Ryan Trebon was about 1/4 of the way around the course! I immediately went to work, passing 4 or 5 guys at a time. I was hammering the pedals every chance I could get. Near the final laps, I was starting close in on Barry Wicks. I was thinking, holy crap... Barry Wicks is right there!! When it was all said and done, I just narrowly missed getting pulled and ended up 13th. I'm sure I could have bettered my spot 5 places if I had a good call up. It's cool and all to go and race the national series, but I really don't want to get too caught up in it. It really takes a lot of support and experience to do well at a race venue like Mount Snow. I would need to travel out there for a whole week to pre-ride the course to the point where I could rip those downhills fast enough to compete in the top ten. I think I have the fitness to be in the top ten, but my mud mountain course skills need some work. Seeing that I only get 3 weeks of vacation a year, it makes more sense to try and do well at a lot of races where the courses aren't such a huge factor. Maybe next year I'll focus on the 100 mile series in the spring and summer, and the Midwest Triple Crown peppered with some CX in the fall. I was one of the only pro men on a 29er for the XC race. It was nice having the big wheels to roll over all those rocks and roots, and the extra traction on the climbs was appreciated. Riser bars and nice comfy grips (Ergons) are a must. The Quiring bike worked great! I had it set up rigid with Stans Crow tires for the STXC. That bike was so fast in the short track, it was almost like cheating. If Ryan Trebon had been on my bike, I think he could have lapped the entire field. People really dug the Bells Brewery jersey's too. Bells is known all over the country. Thanks again to all the sponsors.
Posted by Quiring MTB Team at 2:14 PM

Congrats Mike. It's been nice to see you ascend to the top level of the sport. I applaud you for leving Michigan to tackle the big events against the big boys. I know what it's like and how hard it can be. Keep at it. Later.

mike, nice job making their legs hurt out there. keep it up!