Jason Lummis and the Simonster awaiting the start ! 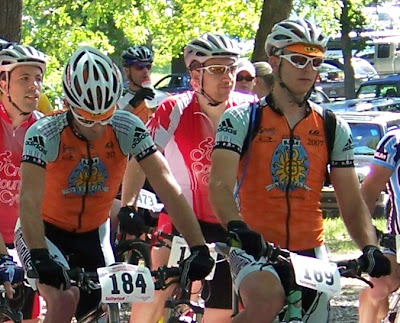 And there Off for 6 10mile laps of Stony Creek Metro Park ! 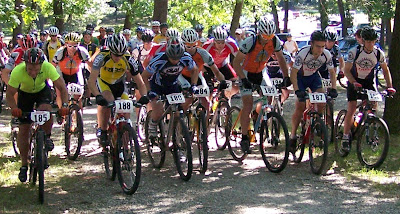 #1 and #2 racers Simonster and Christian Tanguy 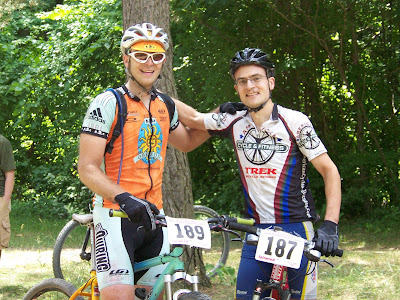 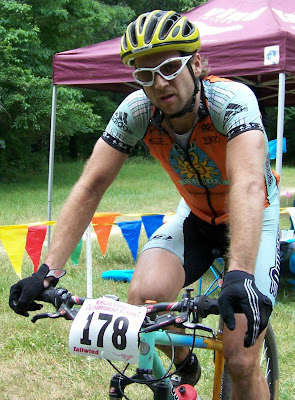 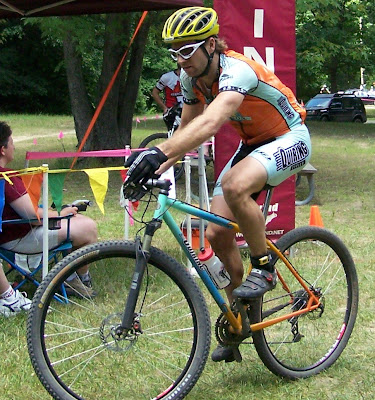 Simonster:
Not quite the kind of pace I wanted to start off with for a 60 mile marathon race, but Christian was ready to push the pace early. I got a bad start and ended up in 5th spot heading up the first climb while Christian started to open up a gap immediately. By the top, I got around Mike Anderson and bridged the gap to Christian. Once I had him reeled in, the two of us continued to ride off the front. I never really took hard charge of the pace because I knew we were pretty far off the front and the winner was eventually going to be one of us two. Christian continued to put it down hard in the single track and it took everything I had at times to stay with him. Eventually I could tell he was getting tired and I took a couple digs to test him on laps 4 and 5. Finally at the end of the 5th lap, I attacked hard on the big climb heading back to the parking lot and opened up a gap of about 30 seconds. I maintained the gap all the way until we were in the roller coaster single track, where I ran into some lappers (literally) and crashed. My chain came off and I had to fiddle with it to get it back. By the time I got going again, I could see Christian gaining! I sat up and let him bridge on the two track heading back to the finish. I could feel my legs starting to cramp and I knew it was going to be a tough finish. When I stood up and attacked on the last climb, my legs just gave out. Somehow I managed to get back on his wheel as we crested over the top of the climb. Christian went for it, and I stuck to his wheel like glue. We got into the last little tricky section of single track where another lapper awaited us. I got tangled up with him and had to un-clip as Christian was still charging. In the last long lead out to the finish I was able catch back up to Christian. I got around him heading into the finish shoot to finish 1 second ahead of him. He's a tough competitor out there at Stoney for sure. It makes for a tough race when there's no real place to coast and rest on a flat twisty course like Stoney. Thanks goes to my wife Michelle for the flawless camelback hand offs. Another thanks goes to the Quiring machine and all of our sponsors. Next race on the radar is the National XC Championships in Vermont. I'd be blown away with a top ten result there. Tough Tough competition for sure.

Jason Lummis:
Stony creek and a new bike ! Wow does this bike roll smooth. I have never owned a titanium bike before and have only limited riding on the material. The Ti bikes a have ridden where never the correct fit and usually small. I have raced on Scandium (or the many versions of aluminum with added materials) then carbon fiber, followed by steel and now titanium/carbon. My steel bike was the first real bike that I felt at one with. Stiff, smooth and No harsh abuse from an overly stiff rear triangle. My first real race on my new Ti/carbon frame was better than I could expect, the fit was the same as my steel. Titanium just seems smoother and an added spring to the pedal stroke. It never felt slow to accelerate or mushy compared to the Steely just smoother. That's the best I can describe the awesomeness of my QUIRING titanium with Carbon top tube and seat tube 29er. The fact that it is about 1.5lbs lighter than my steel build might help a little on the climbs, but here in MI there not ever that long, so I'll stick with the smoother ride qualities over the total weight differences.
Now about the race --------- 60 miles of Stony Creek Metro Parks 2tracks and single track. Race day temps where fair and not very humid = BIG +. We had 17 starters in the race and 15 of us new we would be racing for 3rd as THE SIMONSTER and series leader Christian Tanguy would be off the front in minutes. I set myself up good at the start and was running in the front of the chase group as Simonster followed CT and Mike Anderson tried to hang. After half the 1st lap M. Anderson came back. I had all intentions of setting up Joberon for a good finish as he is sitting 2nd in the USAC series from Tailwinds. We had a large group of 9 or so going into the 2nd lap and I tried to draw out some of the wheels suckers ( non pace setters). I put a few hard efforts in and tried to get a few guys to over work themselves. 3rd lap there was Herriman, Mike Anderson, Joberon, me, Kuhn and Jason B. I moved to the back and somehow Joe and I lost contact to Kuhn and Jason B. I kept pushing the pace with Herriman doing the same. We found Kuhn fixing a flat at the begging of the 4th lap and caught Jason B. a few miles later and Mike A. disappeared. Herriman and I set pace while somehow Joberon lost contact after the 5th lap. 6th and final lap I just tried to be in the way, slowing things down in hopes that Joberon would recover. And that he did he came back with a little work and was feeling his effort. I gave him the last of my water and he attacked--- Herriman covered and jumped to the front to set pace again up to the Look out climb. As we crested a corner on a switch back climb I knocked my chain off and lost a few seconds. Then everything went down hill---- Lapped traffic in the single track caused me to loose more time repeatedly. It was frustrating, I know they are racing as well, but we are lapping them as we are finishing the race. To add insult the last section of 2 tracks had park visitors meandering all over the trail with no clue what was going on. It was like racing thru a crowded sidewalk. I rolled in 6th in my favorite spot "Just out of the Money" BAH...... It was a great day and the finish was awesome as my wife and son where there supporting me the whole day....Nothing can bring a bigger smile to my face than my wife and son !

Brewchampski:
Racing Vs. Moving
It took some fancy footwork and planning to pull off the weekend we just had.The racing officially started Friday evening when I signed the lease at the new apartment. Erin and I made the move to White Lake on Sunday. We were looking for something a little more central so I'd stop crying about my commute. My drive is now 30 minutes rather than an hour plus. Yes! After sorting everything out at the new place we stuffed our faces with pasta and passed out. Saturday we awoke to perfect weather and 4 hours of racing on the horizon. Last year I DNF'd the Stoney Creek Marathon. I wasn't planning on that happening this time. My warm up was quite short assuming the marathon format would slow things down a tad. The start line was packed with some of the fastest guys around including Christian and my teammate Mike. The start whistle was blown and off went Christian with his best start I've seen all season. Wait a minute, isn't this a marathon??? The pace was not one bit slower than the normal XC events. I couldn't believe it. I was struggling for a while to hang. Out of the first bit of single track we came and the gap was already formed. The race for 3rd had begun. Our group was flying. Mike Anderson(RBS) was laying down an awesome pace. Kuhncappi (KLM) ripped it up in the single track. My Teammate Jason L. and a few others were all hauling the mail. It was fun. Late in lap 4(of 6) I started noticing some cramping in my calf's. With my water bottle empty and camel back almost there, I was forced to ease up on the final large climb before the finish. It was hurting bad. By the time I was through the finish I had a fresh bottle and was feeling better. I bridged the small gap back to the group and we were off on lap 5. We were all showing signs of fatigue at this point riding most of lap 5 out together. Until that final climb. I fell apart. My legs were cramping so bad I had to stop. I stood there for few and started walking slowly. Trying not to panic I reached the top of the hill and bobbled my way back to the pit area. The group was out of site at this point. I chugged a couple bottles down and pedaled gingerly forward to start the 6th and final lap. After a few minutes my legs came around and I went to work.Managing to regain contact with the group. After an attempt to get away and my bridging efforts the leg cramp's returned. Robert Herriman (AC&F) was still riding well and I tried to follow. Arriving at the last climb I did everything I could to get up and over with Robert but couldn't quite stay on his wheel. He continued on with a strong finish to 3rd and I limped in for the 4th spot. Another good day at the races on the Quiring 29er. In order to recover for a full day of moving Sunday I had no choice but to drinkdown some Bell's brews. This put me back online for what was even more of an effort than the race...UHAULIN'!
See ya,Joe