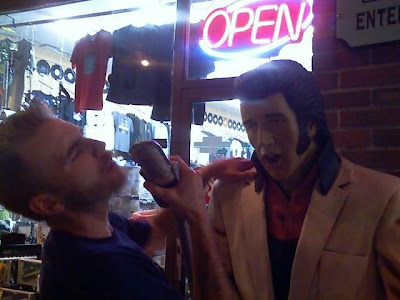 Well… thank god the first MTB race of the year is over with. Not quite the result I was looking for, but it wasn’t quite the temperature I was looking for either. We left the house and it was around 40 degree’s. I think the thermometer topped out at above 90 degrees in Columbia TN, so that was a huge shock to the system! A total of 18 Pro and Semi-pro’s lined up for the start. My start was OK. I had trouble clipping in, but easily overtook everyone for the whole shot once I got my footing. We swung a hard left onto the pavement and I took a good hard dig. I looked back and had a gap so I kept pushing the pace most of the first lap until my handlebars starting slipping back and forth. DOH! Eventually I had to stop near the end of the first lap and tighten them. I probably lost a good minute doing this. The rest of the race I spent alone trying to bridge back up to the leaders. Every time I tried to give a good push, the heat overtook me and it felt like was in a sauna! So I backed it down and coasted in for a 4th place finish. After the race, Joberon, Erin, and my wife Mitch all went and hung out in downtown Nashville. Although we didn’t find any Oberon down there, I highly recommend a visit for anyone looking for a good time. I was a bit nervous about the performance of the new Scandium Quiring bike, but that’s all put to rest now. The frame feels just as stiff and reliable as my Ti frame I rode on last year. It held the lines great and wasn’t too rigid feeling. Believe me, it went through one helluva test down there on all those rocks. Lot’s of people were checking it out and admiring the sweet paint job. Thanks Scott! I also rocked the Stans No Tubes wheels with the Crow tires. I used the Crows last year on my American classic wheels, but I have to say they feel much better on the actual Stans hoops. I believe this is a much more reliable set-up as they are designed to work together. A thanks goes to Mike at No Tubes for building a superlight durable wheel! All in all, it wasn’t a bad way to start the racing year. I think my form was there, but the heat just kind of took it out of me after the first lap. Hopefully we see some more mild temps at the Sea Otter in three weeks.
Mike-
JOBERON checked in as well:
This past weekend I found myself, Erin and Mr. and Mrs. Simonster at the Chickasaw Trace Classic MTB Race in Columbia TN. It was the second race of theAMBC series. We arrived to find steaming hot and dusty conditions. I was a bitskeptical about my first real trail ride of year being a race. That along with90 degree temps and dust filled air left me a little anxious for my first eventof 2007. The start of the race was 12:30pm. Just in time for some peak heat. ThePro/Semi-Pro wave went off first with my Expert group scheduled to launch acouple minutes later. After seeing Mike propel his Quiring 29er off the front ofthe Pro/Semi-Pro group with a 20ft gap into the first bit of single track, I was inspired. I went for it and managed to have a little air between me and 2nd place. Coming into the first rocky climb a handful of guys were with me so I tried to keep the tempo high. By the end of the first 9+ mile lap there were 2left. I let one of the riders come around and work for a bit. We hit a flatsection of trail at the 2mile mark and I attacked. I was alone until the lastfew miles of the lap when one of the riders was able to bridge. He was setting acomfortable tempo for the 3rd lap and I chose to stay put and recover a bit. I was hoping to jump late and take the win. Unfortunately I waited too long as weran into traffic. I wasn't able to get by and came off the bike creating enoughof a gap to lose the leaders wheel. I ended up rolling in for second place. It ended up being a great weekend and worth the trip. Nashville is just down theroad from the venue and made for a great post party. I'm sure I'll make the tripagain next year. Thanks to all of our great sponsors. It's going to be a great season thanks to your help. And a special thanks to Michelle Simonson for all the water bottlefeeds!
Let's get ready to rumble!
Joe
Posted by Quiring MTB Team at 2:47 PM

Great start to the season guys. Do you have any pictures of that sweet paint job of which you speak? I'd love to see some. Keep up the good work.

WPG scroll down thru our blog there are photos