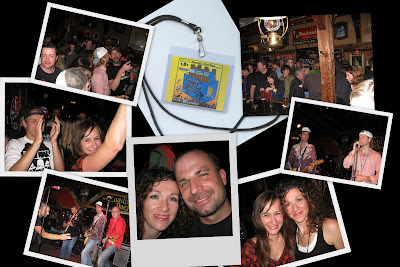 ----- pic by Sue Stephens
The party was incredible fun thanks to Jim Parks and the rest of the Bells Brewery family for giving us the chance to celebrate in style. Jim also brought up the 8ft tall Oberon bottle for the beer tent at the Iceman finish line.
Another year of great times racing bikes, enjoying custom brews and custom bikes. Many wins, podiums and great efforts where made by all the team mates ! 2010 will be the 10th year for the Bells Brewery sponsored team, we look forward to making it the best. 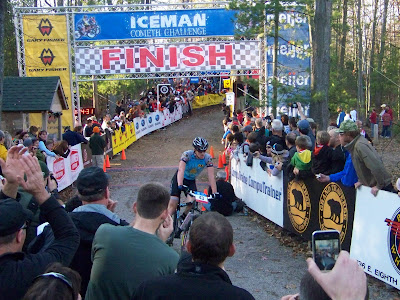 5th place. Not as good as last year, but a good result still. Them fisher boys brought some "A" game this year, pretty fun to race with them guys. Carl Decker wins the style award, for the best 2 wheel drifts through the turns and just being a badass, guys gots some skills on a bike.
heres a race report:

The start was just like any other paved road mountain bike start, kind of scary and pretty fast. Decided to pull so i didn't get taken out in the chaos. It was a pretty long train of guys until about Smith Lake Rd about 5 miles in or so. But then the gaps started to form, had to be kind of attentive and stay at the front. Can't really remember who was pulling through that first section of single track, might of been Sam Shultz or JHK, but right after that JHK grabbed the reigns and it was fast as hell for about 20 minutes. 6 of us were gone and the race was set. JHK, Shultz, Tristan, Matter, Decker and myself. A few miles before Williamsburg road JHK put in big attack, I got on his wheel immediately and hung on for dear life, it all came back together at some fresh single track section. Seemed like everyone took some pulls for a little while, right when we got on the VASA JHK had another go, but it was the same deal, this race was coming down to the last hill. There was some more attacks in between there and the end but no one could get away, not really much point in trying. Right when we got to the last wood chip climb the final surge came, not a good time for some chain suck, and thats just what i got. I got off and ran and tried to get my bike back working. I had my chain back on at the top but those guys were long gone in front of me. I got around Tristan but ran out of time to catch Decker. I think I might have been able get Decker, but those other guys were gone.

I'm pretty happy with my race, its always cool to get to race with the big dogs, and really cool to hang in there the whole race. Would have been nice not to get that chain suck, i hate front derailleurs... I'll be back for blood next year, and maybe with a single chain ring too. The crowds at the end were awesome, really cool finishing like that. Thanks to everyone who was cheering along the course, all the people is what makes this race so cool.
MA.
Posted by Quiring MTB Team at 8:41 PM