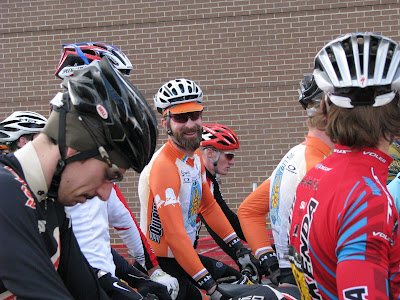 The 2008 Iceman was another great event. The weather was perfect and the course fast. The competition was fierce and strong.
I came into this race ready to have fun and ride strong. My parents, brother/sister inlaw and wife/son all came up for the BIG race. Kathy, Zack and I drove up Friday afternoon to meet up with the Simonster, Stewy, Doyle, Randy and Cruise for a preride of the course. It was a really nice and the course was fast. A good relaxing preride was done and off to check into the hotel, then dinner and then a quick Iceman # pickup and back to the hotel for a early night.

Race day : My son Zack likes to get up early, try 5:30am, while my race was at 2:30pm. Z and I hung around till the Omellete Shoppe opened at 7:30 am. We then hung out around the hotel pool till about noon and headed out to Kalkaska so Zack would nap in the van as we drove around for awhile.

Kalkaska--- We parked at the school around 1pm, I dressed and used my steel bike for a warm up bike as it was still sleeting on and off. Stewy calls me as I am heading out (SS)"My FS Anthem shock isn't holding air", (JL) " Man I told you not to bring that FS bike back to MICHIGAN", (SS) " Can I ride your steel Quiring", (JL) " Yeah sure, 1 gear 34/15, and you will be spun out and 23 mph on the flats, Oh yeah and your like 7" shorter than me"........ And then I just kept riding the course backwards to get a warm up. Check the clock ooops, I am going to cut this close. I got back with about 25 minutes to start (sorry Stewy), Scott had to remove the fenders on the bike and adjust the seat height. A quick change into my race gear and to the line in about 3rd or 4th row. I had set my STANS Crow and Raven on my 355 ZTR rims to 25 psi which was perfect for the pre ride and the cousre at hand. I notice the large selection of Road Pro's and Cat 1/2 guys in the field, this is going to be a hard start. GOOOOOOOOO and the choas begins. I get pinched in in the middle, literally fight my way to the outside and start moving up. Since the course is very OPEN, the the use of the weeds and straightening out corners is the best way to get around racers. The fact that if your not moving forward, you WILL be going backwards, is a struggle for most and a battle for all. If the racer if front of you is pedaling then stay on his wheel if he stops for a second and you don't pass him you will be passed by others quickly. In the first 10 minutes there is no sitting in, just to the wall speed, energy and aggression. I hooked onto Joberon as he was blasting thru the field, I bounced a few guys as they tried to get on Joe's wheel but I was there. We came to the single track connector between to sections of 2 track. Problem 1 a rider over extended his abilities and now was gaping us from the lead group. The trail opened up and we where around the slower racer chasing some very fast guys ahead. A few hard pulls by a couple guys (notably Joe's buddy Sven putting a huge pull to bring us back in the race), as we catch the group we hit a sandy uphill where I choose the wrong line and was off the bike chasing again. A few guys came off the lead group as they where 25-30 secs up the trail. John Doyle, Jake R. and I seem to be at the front of the second group most the time, with Doyle animating the pace consistently. I put a few hard efforts in to try and shake things up some, especially on the 2 track to dirt road transitions (WWMSD?). We had a group 0f 6 or so at Williamsburg and we picked up Stu from Canada shortly after the crossing. Stu would get to the front and we would slow down, Doyle would go around him and then repeat. The canadian was thinking he was the strongest, but he was not. The race was coming to an end quickly, I was feeling great. I was at the front as we caught Travis Brown and as we hit the hill with about 6 to go. Chris Peasario put a little effort to pick it up, as he was being annoyed by the canadian. Back together we rolled towards the finish with Doyle at point. I was staying in the front 3 at all times as we hit the final single track and the short steep climb, Sam Shultz was at the top trying to get his chain on. I knew we had been racing for 9th, but now 8th opened up. Doyle stayed on the front and I was on his wheel as the group started to splinter. We filed thru the last single track then up a hill, Doyle in front, me then Chris P., just hanging on. And that was how we finished, we all kicked to the line at 1:30. For my fastest Iceman and another 9th place. The field keeps getting stronger and my placing stays the same. Great Job to My teammates, Anderson rocked it, Erin rocked, JM won it, Joberon worked it, JAJ survived it and Q built it. Big thanks to our sponsors BELLS BREWERY, QUIRING CYCLES, STANS NO TUBES, CRANKBROTHERS, OAKLEY, ABERDEEN BIKE for all the support in our racing en devours.


Hitting Williamsburg with Doyle and Jack 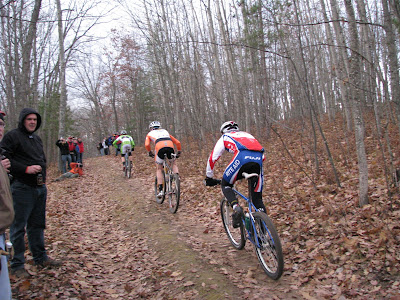 My son zack and I

( is that Uncle Fester in the background?) 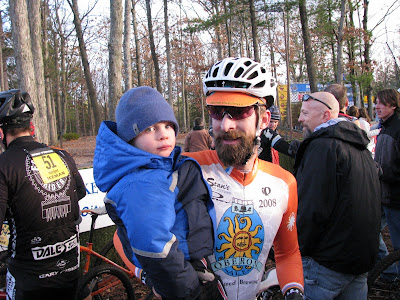 Nana, Zack and Papa (aka Superfans) 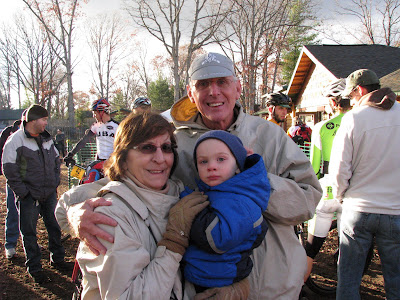 Posted by Quiring MTB Team at 6:20 AM