The Simonster going for 2nd ----JHK not making the sprint ! 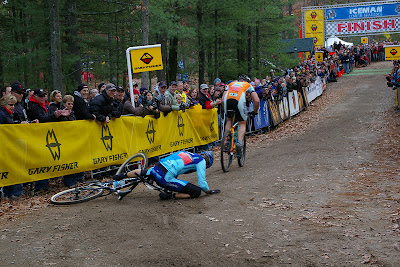 
THANK YOU !!!!!! TO OUR SPONSORS !!!!!! OUR SEASON WAS MADE EASIER FROM THE HELP OF THESE FINE PEOPLE:
BELLS BREWERY
QUIRING CYCLES
STANS NO TUBES
OAKLEY
CLIFF
ABERDEEN BIKE
ADIDAS
PAINT CREEK BICYCLES


Jason Lummis used his garmin GPS for the race ! see below ( Sorry about the links for some reason I can not cut and paste the embedding links)

You can put this GPS info into motion below :

Joe L. from (http://www.midwestcyclinggroup.com/) posted some great videos on you tube: 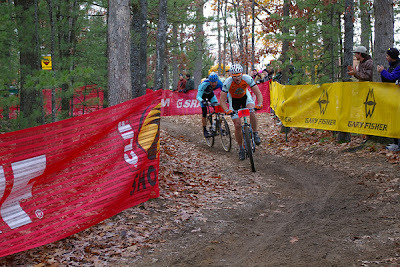 Well, wrapped up another season.
2007 felt like somewhat of a building year. Did a lot of new "out of state" races, visited some really cool courses, and met a lot of new really cool people who share the same passion. With Mitch finishing up her masters and Ingersoll Rands' generous engineering budget, it's nice to finally have some extra cash to get out and travel whenever I want, even though it's my own hard earned cash. Throw in the support from Bells, Quiring, and Stans, and you can almost manage a full pro US season. Had a lot of fun, and some not so fun times, but it's all worth it in the end. Got a chance to tangle with the top pro's all the way from Maryland to California and I learned a lot about myself and what I need to do to prepare for another succesful season. There's no better way to end the season than with the Iceman. This year was a tough field as almost all of the Midwest pro's were in attendance as well as some hitters from Colorado. The course was the fastest I have ever seen it, and the racing action was just as fast. A few call-ups (which was a first) and a 5 sec countdown and we were off. I immediately went to the front and went to work. I jammed it a few times to pull out the contenders and our group was set. Seemed like I was never further back than 3rd the entire race and probably spent the first 15 miles pulling the train along. That's the thing with the Iceman. It gets tactical, especially when the course is so fast. Guys that sit on the back for the entire first half of the race stay fresh, while the horses up front wear themselves out. But that's road racing... I mean Iceman racing. Sometimes you get the breaks and sometimes you don't. I was satisfied with 2nd place. No crashes, no mechanicals, and I rode a strong race. Even managed to drop an Olympian! Just gotta brush up on my road tactics. You can't always ride eveyone off your wheel, but people have been telling me that for years. Congrats to Brian for sniffing out the winning move. Thanks to everyone that came out in support of the Bells party. See you all in the Spring! 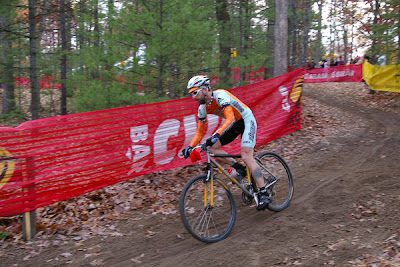 29er's ---- Yep thats correct 2 9th place finishes at the Iceman cometh. Last year was a good ride with a tough field of competitors. This year added a few more pros and local Midwest hammers, the field was larger and tougher. I love this time of year the season is done every thing is shorter -- daylight, ride time and race times. CX racing short and all out, like the Iceman.

Myself, Kathy, Stout(1 of 3 dogs) and our son Zack arrived with camper trailer in tow at the finish Timber Ridge Friday afternoon. We set up camp and I took Stout out for an out and back. We covered the last 5 miles of the race course to make sure the dbl Stans No Tubes Crow tires I was planning on using would be the best choice. We came across all the Big names Matter, Schouten, JHK and ned Overend. I was happy with my tire choices because the course seemed real fast. Back to the camper hung out with the family ate some great homemade dinner. Drove over and did the number pick up around 6pm. Scott Quiring had a booth showing off some nice frames. including a 29er Tandem that was just awsome. Back to the camper for a good nights sleep and up early with my son at 7am. Hung out and watched the early finishers, The Torrance Bros finished 3rd and 5th in 30-34 expert, great job Guys.

About 10:30 my legs started twitching like a nervous dog. I tried to relax, had everything laid out ready to go. Bikes loaded, clothes, gloves and helemet. 12:30 we are off to the start, plenty of time to ease into the race. Just about to Kalkaska from timber Ridge and "SHOES" I left my shoes in the camper (enter F BomB here). Back for the shoes grab them and get back to Kalkaska 40 minutes before start time. Ride out and back for the first 3 miles( feels great), race is on, I am thinking top 15 for sure (big guns here today, locals and imports).

GO..... We are off flying and I feel calm. My buddy the farmer is next to me as we squeeze around the first corner, we hook shoulders forcing me straight to not go down. We dislodge and back on the gas as I close onto the main group that the Simonster is just killing. Dangling on the back with Ned, Marko and Cole. I needed to close the gap for the draft. JHK moved to the front which slowed it down just enough as we caught on, then Matter accelerates. Dangling again, Ned jumps across leaving me with Cole and Marko Lalonde (on a SS 29er). Cole and I take a few hard digs but not enough to dent the gap. We lose Cole and lost the groupo just before Tornado alley.

Marko and his SS--- I am telling you this kid is tough, I could not lose him on the flats, yet he would kill me on the climbs. Marko kept the momentum rolling as we sat out in the second group 2 minutes back from the leaders and 2 ahead of the 3rd group. Picked up Ross Schnell just before Williamsburgh Rd and dropped him a few miles later, those screaming crowds absolutely energize you. We picked up Mike Anderson a few miles later as I did all I could do to maintain our time gap. We finally hit the steep hill coming into the last 5 miles, kaboom I blew up. Marko jamms away and Mike is just ahead. I gave it another try and got to within 5 secs of Mike but just wasn't able to follow through. Came up the last climb into Timber Ridge loving life another top 10 and as I roll over I hear the cheers for more riders coming. I had to ride hard the last 1km as my 2 minute gap was down to 30 sec, I pulled through and even had time for a few High fives on the finish line run. My wife son where right there with a favorite buddy (Two Hearted in a bottle). It was great day and a really great ride with Marko. We just flowed through the course almost helping each other succeed without communicating it. 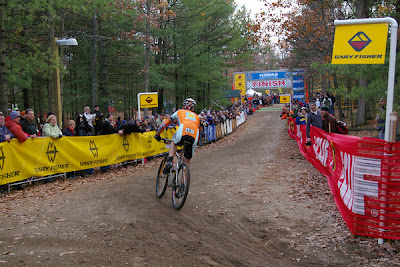 Joberon looking for a beer ! 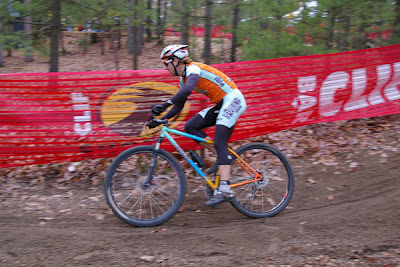 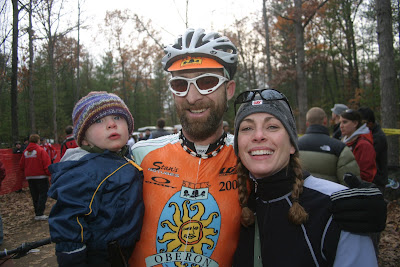 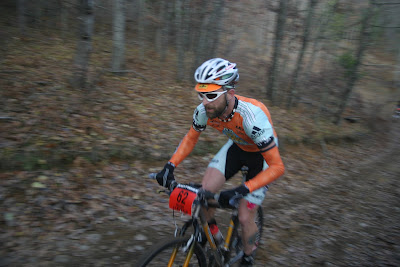 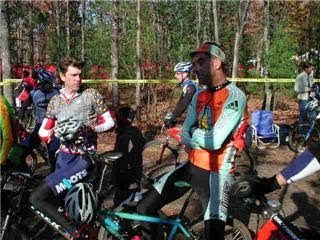 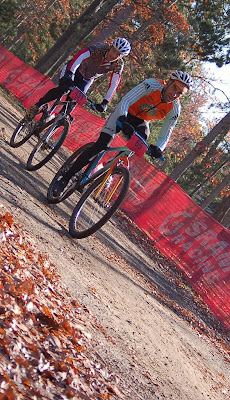 The iceman 2007 weekend has come and gone with a tremendous amount of fun and memories. I was able to race early win the 40 -45 for the third straight year and then have enough time to watch my number one son Jozef race in the snow cone kids race....
The 40 - 45 expert race was extremely fast this year with the appearance Frankie Andreu http://www.frankieandreu.com/ formerly with the US Postal cycling team and 9 times finisher of the Tour De France. I heard a rumor that Frankie was racing but it did not dawn on me until mile 14 when a group of three of us were still together. I just thought it was so strange when this guy with mis-matched jersey, shorts, bike was so fricking strong. The disguise worked great Frankie it took 14 miles for me to figure it out. I looked over recognized a familiar face. I yelled hey Frankie and he responded. That answered who this fast guy was that I had not seen before. I thought to myself I've got 14 more miles and a few very steep hills to try and get some sort of gap. There was a group of three of us until about mile 18 when Frankie laid down a serious attack and long pull. I waited to respond wanting the third rider to chase but he did not. I jumped clear and chased for about 2 miles and bridged back to Frankie. After catching his wheel I went to the front and remained in the front for the last 8 - 10 miles. At times I thought I had dropped Frankie on the long climbs but not looking back I was not sure if he was still there. As we completed the last climb and enter the short section of single track I could feel a sprint finish approaching. As in the past the final maze and approach to the line is better served for the person in the front so I remained there. Not certain how the finish approach and turn up to the line and distance was I choose to hold a tight inside line into the turn swing wide to left and up to the line with everything I had. I popped out of my cleat as approached the line but were was Frankie? The former track racer? After we crossed the line and chatted about how much fun we just had he mentioned he as well as I had popped out of his cleat coming up the short hill finish? Thanks Frankie for the 1:41:56 of racing and fun! I will remember this race for a long time. The party was great and once again thanks to all the great sponsors! Time for a couple weeks off and some trail running. Hope to get out for the last Kisscross race or two.

During the kids Sno-Cone event just before the pro finish about every 4th kid went down in that corner!

I was surprised more pros didn't slide out like JHK!

He wouldn't have come around Mike anyways......

Why have we not yet put together the "Simonson World Travel Fund?" Let him be an engineer when he's 40, and let's help him dominate MTB racing for the next decade! I'll donate the first hundred bucks if someone builds the website.
Washed-up in Utah,
Mike O'Reilly

Good job you guys, glad to hear you had a great weekend of racing. Wish I could have been there with ya.