Team racers Mike Simonson, John Meyers, Jason Jones and Jason Lummis raced this past weekend in the Lumberjack 100. With the help of Mitch Simonson and Scott Quiring as our feed and support crew the team tackled the 4 lap(8mile inner and 17 mile outer) 100 mile race in the Manistee National forest near Wellston MI. The temps where decent as a 65 degree start and a max in the 80's. The race started with about 170+ total racers and 122 finished.
The Simonster lead for over half the race as the eventual winner Chris Eatough slowly reeled him in. Mike held strong and finished 2nd improving his finish from the Mohican 100 2 weeks prior which was 4th. John Meyers held a constant race pace for a strong sprint finish in 6th place. Jason Lummis came back from a 2nd lap rear derailleur hanger mangling for 9th place (added bonus for having a steel frame with a steel hanger mount---Scott Quiring bent it back with a wrench---- Jason only lost about 15 minutes with the repair)Jason Jones finished 48th and gave his all during the race. Great job Jason, especially since he found out earlier this year he has a heart valve defect and will require surgery sometime in the near future (he does have the doc's ok to exercises)


Simonster on the podium with Chris Eatough 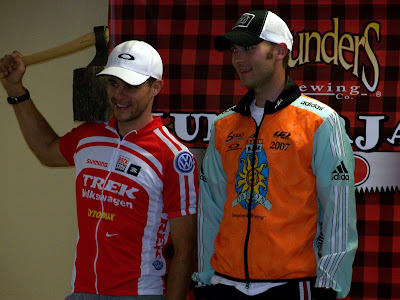 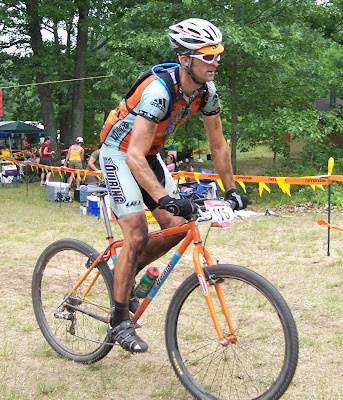 John and Mike up the first climb of the race ! 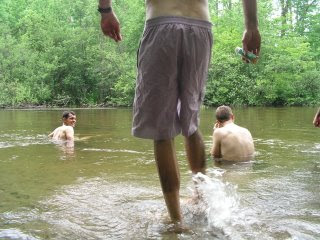 Chris Eatough, Simonster and John's legs @ the river for a bath after the race- 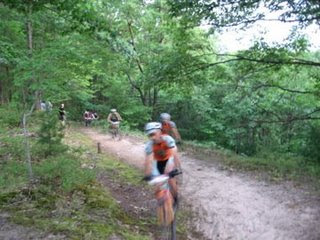 Jason Lummis-----
Wow another 100 mile MTB race, my 2nd in 2 weeks. The 1st the Mohican was just a sufferfest and I never felt good the whole race. I struggled in for a 13th spot in the Mohican 100, which was a 100 mile loop in eastern Ohio. Well run race just not a great day for me.
Now onto the Lumberjack in which I have raced all 3 years now. The past finishes have been '05 8th place and '06 9th place. I wasn't planning on doing this race for about $125 reasons, but a friend and fellow racer Dan K. had an injury, so I took his spot in the race (THANKS DK-- notice the results have Dan's sponors still attached). I rushed around last minute to get things semi organized for the race, water/food/bike/gear = race on. Rolled into the starting area and found alot of my MI Elite racer friends ready to roll + some National Endurance/24 hour racers as well. We took off with a mile pavement start then into the trail for 100 miles of single track. The 1st lap was ok for me I felt bloated/slow and I rolled around the course, I had caught 1 large stick in my derailleur and had to stop to remove it. The 2nd lap my legs felt much better and I started moving thru the field of racers. I caught up to my teammate John at the end of the 2nd lap, he was in 6th place. Just as I did this I either caught another stick or just twisted my derailleur hanger more from the previous 1st lap stick, but my chain broke and my hanger was bent bad. I quick linked the chain back together and rolled into the finish pit area. Thinking my day was done, I looked at Scott Quiring for help and he just acted cool and calm. Mitch ran over and grabbed Mike's tool box for Scott. Scott pulled a wrench out after removing my rear derailleur and bent the hanger back into position (WOW what support from a team mate as well as the frame builder----- THANK YOU Q and Mitch for your help and support. I lost maybe 15 minutes in the whole mechanical affair and probably 15 places as well. I took off fast and hard catching most of the racers within the 8 mile inner loop and entered the outer loop in 13th place. I pushed hard trying to make up as much time as possible. After 75 miles I was in 11th place still trying to crack the top 10. I passed 10th place at about mile 80 and caught 9th place at around mile 85. I had only 1 episode of a small cramp with about 10 miles to go, but nothing bad came of it and I was able to hold off the bonk and finished 9th overall.
here is my Garmin 305 info: LUMBERJACK 100

My new frame is in my hands to be built soon ! Ti carbon goodness 3.1lbs and a 2 lb steel fork from Scott Quiring 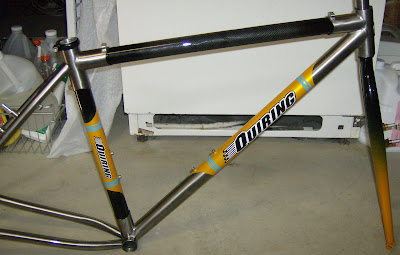 Posted by Quiring MTB Team at 6:30 AM