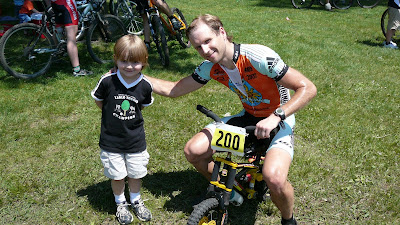 I was the lone Bells/Quiring rider at this event as my teammates were
preparing for the Lumberjack. Typically I ride this course once or twice
per year. A pre ride and on race day. This year would be no different
due to distance and lack of time to visit this urban cycling mecca. As
soon as Erin and I arrived at Bloomer we could tell it would be a great
day. We saw many familiar faces had come out to cheer us on and enjoy a
beautiful day at the park. A nice size field and a gradual downhill made
for an exciting start. I managed to get myself in the top 4 or 5 before
we ventured into some of Bloomer's famous tight single track. Eventually
on the first lap(of 5) Christian made his move and began his dance
through the tricky stuff. With none of us able to respond we forged on
fighting for that 2nd spot. The KLM crew were laying down a strong pace
the entire day. Gapping me through each section of single trail. A
couple laps later it was myself, Greg K.(KLM) and Jason B.(KLM)
chug-a-luggin' wondering if we'd ever see Christian again. We did! He
was watching us finish. But not until Jason made a strong move in the
twisty twists near the velodrome. I pushed it as hard as I could to
catch Jason but couldn't close down the gap. I did put a little space
between myself and Greg and rolled in for 3rd place. I'll take it.
Thanks to all my family and friends who came out and supported us.
Bloomer is a great venue for spectators. I'm sure all the racers
appreciated the hootin' in hollerin' in those switchbacks. Also, thanks
to my very special friend Quinn(Quinn-beron). He let me try out his new
"Sixer"(See pic). Apparently it's the latest in cycling technology. Keep
your eyes on this little guy in the future.

does that mean jOberon's thinking of trading in the 29'er?!