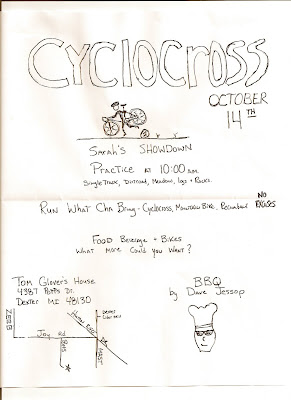 Jason Lummis and Joberon visited the Glovers for a fun day of CX racing, food, beer and friends (new and old). Joberon won with 7laps completed in 36 minutes, Jason was just behind for 2nd place. Fast and furious CX racing that Jeff Wienert himself might of approved of if there was a sand section (in the works for next years Showdown). Great awards from Aberdeen Bikes in Chelsea topped of the days events. 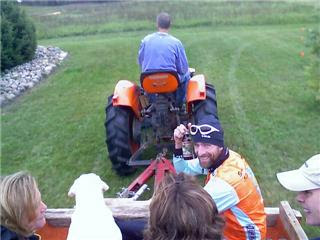 Sarah's Showdown I won! I took my first race win in years this past Sunday at the first annual Sarah's Showdown CX event. Tom Glover and his wife Lisa hosted this "race" in honor of their beautiful newborn baby girl Sarah. They were wonderful hosts and in the end left us all hoping for a 2nd annual Sarah's Showdown. After Saturdays super secret stealthy covert Sarah's Showdown CX practice ride with my super cool mega fast friend Kelli Emmett(Giant) I was charged and ready to take down my CX nemesis. Jason Lummis! "You're going down Lummis" I yelled upon arrival early Sunday atthe Glover's. Only to learn Jason hadn't arrived yet. Oh well. Mentally Iwas there! With the smell of donuts, cider, coffee, chili, beer and other various fall eats Erin and I unloaded the machines from the car.With a fierce look in our eyes we kitted up, filled water bottles,downed some Gu's and began our pre-race warm up. I could feel Jason's presence. I knew he was lurking somewhere on the course. I started my warm-up lap eager to see what Tom had created for us. To my surprise it was a full on very challenging and fun course. He combined his property along with his parents to include all types of terrain and obstacles.Including a large log that only Gary H.(Hell'S Riders) was able to bunny hop. In addition, there were some sweet single track sections, plenty of barriers, some good rips trough the landscaping and a deck run up/down.Hilarious fun. Eventually I bumped into my arch-rival. Not a word spoken. It was all business as neither of us wanted to let little Sarah down during her first attempt at race promotion. Eventually we were ordered to stage for the start. About 25 raging cyclists stepped up to the line. First the countdown then..."GO"! We were off for seven laps of action. Tom Glover himself took the hole shot followed closely by Gary,Lummis then me. We hit the first obstacle, the log, which Gary easily bunny hopped and took over the lead. Over the deck, pass the door wall and around the garage we went. Gary still keeping the pressure on. There was a bit of a gap but thankfully the course opened up allowing me to bridge. We hit the first section of (large) planks and I was nearly there. Around some trees, many tight turns and the sidewalk leading to the basement and I had reached the front. But so had Lummis. It was on!Jason and I battled it out eventually creating a nice cushion to the others. We danced. We pranced. We pedaled our way around the rugged course in hopes of victory. Then, it happened. The kinks in Jason'sarmor began to show. With each passing lap the aroma of hot chili and the site of ice cold brew was slowing the MTB specialist. In the final two laps I took full advantage of my enemies weakness and laid down avicious assault. With one to go I put it into cruise control, leaped over the last set of barriers and through the finish line. The crowd went wild. Jason was the next to come through for second. Erin rode in ashort time later to take 1st in the woman's category. Then too, the crowd went wild. Afterwards everyone enjoyed lots of great food and drink, a hayride and even a bike weigh-in. The awards ceremony was held10 feet from the cooler and included some great swag and trophies thanks to Tom and Aberdeen Bikes. I got myself my very first wool cycling jersey! I haven't taken it off since. Thanks again to the Glover's for their hospitality and putting on a great event. Thank you Kelli and family(Plymouth Orchards) for the excellent pre-race eats and cider mill tour on Saturday. Ya gotta love fall in Michigan. Don't look now, the Iceman is a comin'... Joberon
Posted by Quiring MTB Team at 4:15 PM