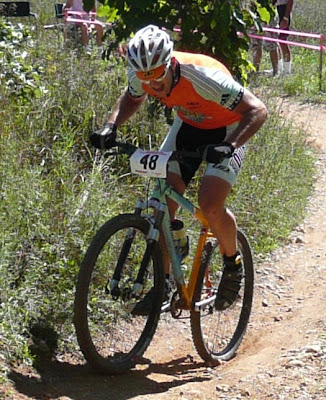 PLRA USAC series race 3 10 mile laps of 99.5% single track (the finish/start area was a grassy 2 track). With a large field teammates Joberon, Simonster and Jason L. lined up to race hard. Mike Simonson brought out the scandium 29er set up single speed and powered away from everyone ! Jason finished 6th while Joberon finished the race 11th ahead of the 3rd place series points battle assuring a 2nd place overall in the Tailwind MI USAC series for 2007. Jason Lummis is trying to sneak into 4th from 5th. Video by MASHER MEDIA:

SIMONSTER:
I always enjoy a couple laps at my home course PLRA. I've been riding there since I was 12 years old. Robert Linden would come pick me up and we'd do laps there in the dead of winter. I did my very first MTB race at PLRA. I raced sport at one of the Paul Bunyan races and took dead last. I think there were like 40 guys in my class... for a Paul Bunyan race! Needless to say, a lot has changed since then, both to the MTB scene, and also to the PLRA course. I decided to ride a Single Speed this year because I really wanted a tough workout in prep for the Chequamegon 3 weeks away. I chose a 34-14 on my 29er which turns out to be almost 70 inches. Getting that gear going was tough as I totally blew the holeshot. To my suprise, Brewchamp took the holeshot with Christian hot on his heels followed by me. I quickly got around both of them before opening up a gap on the first downhill. I knew I would have to make time on the downhills because cranking that gear uphill was going to take its tole on me in the later laps. And it sure did. By the third lap the big climb about 2 miles in was wearing on me. I made it up every time though and cruised in for the win.

I was feeling a bit ambitious, so I entered the single speed race as well for another 2 lap workout. My goal was to keep them both under 40 minutes, which I was barely able to do. The 34-14 was beginning to seem like a bad idea. Entering the single speed race and the XC is a great way to build some extra endurance and it helps to further promote the sport and the venue in Michigan. I'd like to see more guys double up and do both. Misfit Psycles (http://psyclestore.com/product_info.php?cPath=25_38&products_id=160) makes this kit for 80 bucks that converts your geared bike to SS. It works great and it's never given me a problem.

Thanks again to all the sponsors. BTW: Q looked a lot leaner when I saw him at the O2S. Could this be a sign of training???


2 for 2 at PLR The Tailwind/USAC State Champ Series kicked off this year at Pontiac Lake. I remember this day vividly as I had a horrible race. With the series nearly over I was thankfully left with one more opportunity to tear one of my favorite courses to shreds. Race number 7 of 8 brought racers to Pontiac Lake Recreation Area on a picture perfect day. The rain during the week had the trail tacky and super fast. The temperatures in the morning were cool and the winds were light. The Elite field was stacked and ready for the 3 lap drag race. I decided to go hard from the start. The all or nothing plan. On this course I knew if I was feeling good pegging it from the gun would work to my advantage. A couple miles in nearly half the field went around me and I was left gasping. Damn! I tried to regain my composure but had nothing. I just sat back and watched as my buddies rode away. This has happened to me a few times this year. It's strange, at this point I just say to myself "oh, it's one of those days I guess." The slightest pace change or if a hill appears just checks me out. It's not fun. Another bummer of a day at PLRA for me. Next on the docket may be a little rest. Hopefully I can come into the final race recharged and ready for some fun. Great job to my teammates and all who raced.


LUMMIS: PLRA was in great shape ! I put the White Bros suspension fork on for the 2nd time this year and the first for th TI/Carbon Quiring. Haven't been riding consistantly over the last few months and I went into this race just wanting to have a intense race. The Elite field was larger 20 or so racer lined up for the 3 lap hammer fest. Pontiac LK is a lot like my local trail -Poto- in that it flows well and is tight single track. You have to trust the flow of the trail to rail the corners as a lot of brush block your vision, just like Poto. The race was off and I felt pretty happy with the group battling for 3rd as Simonster was gone and being chased by the Cricket. 3 laps and a group of six had formed on the 1st lap. On the 2nd lap I was 3rd wheel, the 2 guys ahead bobbled on a rock garden cross over and I attacked hard to try and shake up the group. Mike Bartlett was a new face in the crowd and was holding on as 2 bridged back up. The odds for a top 3 finish just got a little better. I set pace for the rest of the lap, slowing to grab a bottle. Almost stopping my pedaling to get someone else to set pace as the 2 bridgers wouldn't come around. I pulled over and Mike took over the pace, pushing it up as much as he could. Brent attacked on a climb and I attempted to jump, but Mike swerved over as he cramped a little and Brent was gone. I kind of sat behind Mike wondering what bridger 2 was going to do since his MO is generally sit on till the end then attack. Mike was killing himself to drop us and he was starting to falter at the end and I wasn't going to just jump him after all his hard effort today (I respect that). Well as I guessed 3rd guy attacks and were of flying down the trail, up the last climb. Flying down the last DH to the flats watching 3rd wheel hammer away as Mike tries to get more speed. It was a great effort by both and fun to watch. I finished 6th place in my favorite spot just out of the $$ --- CHEQUAMEGON is on the horizon :>) .
Jason
Posted by Quiring MTB Team at 5:25 PM