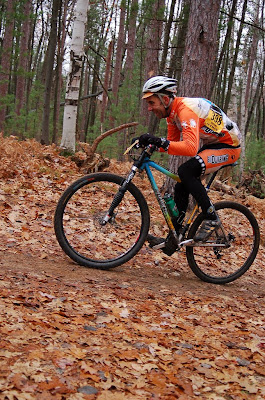 1st place Expert Men 40-45
This year was my 15th time racing the iceman! Were have all the years gone? The first year was clear back in 92' when Kinetics Systems racer Peter Noverr won.This years race I had hoped to repeat with a win but was feeling a little tired and weak? I was able to get a great start fast thru the first few miles until my front tire slid out on a simple lightly twisty flat section? I remember rolling thru in my warm-up and sliding a little but did not think anything of it. I hit really hard...bike and body! When I got up I could feel my right side but not thinking about anything else but getting back on to start the chase. When I got back to my bike I found that my stem had twisted which required a couple minutes to re-align. It took about 12 miles to pass hundreds of riders and bridge back to the leaders...somehow I was able to keep track of how many had gone by. The last 10 miles or so consisted of the three of us working and trading pulls. When we reached the last mile or so things were slowing down a bit so I decided that remaining in the front and controlling a higher speed was my best option and also not knowing how the new changed finish was going to play out. With about 1k. to go there was on attack by 2nd. place finisher Jeff Wittbrodt. I chased and tagged his rear wheel. He and I surged back and forth thru the sections of single track and I finally was able to punch it past him in the last section of the single track to get back to the front for the win. Just as so as I finished and gave a congrats to Jeff I felt the pain on my right side surging. The evening at the awards and the Sunset party was over the top.... The best part of the weekend was finishing and winning the prized jersey for my son Jozef so he could wear to school on monday for show and tell. He really wanted me to win so he could show off to the class....a very big deal! As I found out later that day from his teacher at confrences that Joe was the hit of the Day. Monday I also went in for X-rays and found out that I have three cracked ribs! Ouch! Was hoping to return to Waterford for the State Cx race in December but that may have to wait a year. A big thank you to Larry Bell, Scott Quiring, Jim Parks ( great time hanging after the race), Kelley Kronberg (Oakley rep.), Robert Kennedy (#1 mechanic), Clif Bar, Stans and all of my Teammates you guys Rock and Roll!.....It's been an awesome year!!!! How many wins? How many podium finishes? How many National titles? I lost track! Looking forward to even bigger things in 09'John.
Posted by Quiring MTB Team at 6:27 PM