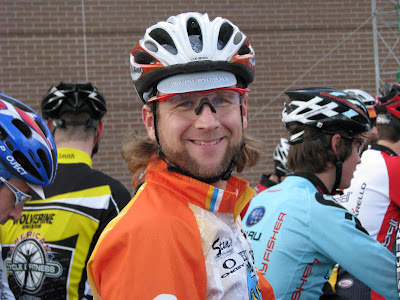 
It's cold. My ears are ringing. Legs sore. The Taco Bell I ate on the way home isn't sitting well. Sounds like post Iceman depression. With the pro race staring at 2:30 on Saturday it seems it's all over in the blink of an eye. Next thing you know you're back at work asking, "what just happened". The 2008 Iceman has come and gone and marks the end of another fun season. It was a supercharged rip roarin' finale that I'll never forget. This year was extra special as my parents and lots of friends made the trip up for their first Iceman experience. My good friend and training buddy Sven even made it over from Germany for a crack at race. This was my 3rd shot at the Pro Class and I had worked hard in hopes of finally having a good race. In the end it was probably my best ride of the 3 attempts but not my best race, or legs, this season. Physically I believe I was ready but my mind really got the best of me leading up to this Midwest cycling superbowl. I started towards the back of the group and had to delicately work my way forward. It's total mayhem during the start. Nothing quite like it. As hard as it is it's really quite a rush. I managed to get myself positioned pretty well within the first couple of miles. Unfortunately the trail narrowed not allowing riders to pass. A gap formed and off went a lead group. Eventually the trail opened up with the leaders still in sight. I charged to the front of my group and tried to chase. I made a fair attempt but realized the legs just weren't there for such a effort. Moments later the chase group reeled me in and we chased together. We were gaining on the front runners but slowly. Suddenly a rider comes flying by on the left side and it was none other than my buddy Sven. We jumped on his wheel and within a minute we were back with the leaders. It was awesome! The lead group must have been 25-30 strong at that point. It didn't last long however as the pace was lifted and the climbs were cracking guys. Myself included. Off in the distance I could see the heads of state drifting away. The group I was in was packed with powerhouses. We were hammering away as we entered some downhill single track. Teammate Jason drilled it Lummis style on the decent and immediately formed a gap. Sweet! I stayed put in the group which eventually swelled to 10 or so. We reached the Williamsburg Road party crossing and I felt so so in the group. I tested myself on a few climbs and felt I was climbing as well as everyone around me but I didn't have enough to try to get away. I ended up riding within myself noticing guys starting to pop off the group with 5 to go. Not long after I made a small attack on a downhill that separated myself, TJ Woodruff(Gear Grinder/BMC) and Derek Graham(Bissell). TJ ended up leading us all the way into the finish single track and eventually to the line giving me 19th for the second year in a row. Not the result I was hoping for but certainly respectable considering the talent that surrounded me this year. The field was stacked with talented riders and it really came down to who was feeling it that day. I congratulate all who finished. Especially my team. Great job to you all. After the race, thanks to my family and friends, we were able to get all riders, bikes, gear and party supplies where they needed to be. My head was spinning. Due to the time crunch we weren't able to make the awards. Bummer. We cleaned up, wolfed down a couple pizzas and headed over to prepare for the 2008 Bell's MTB Team Sunset On The Season Party. This year we moved the madness over to The Loading Dock which ended up working out great. It was still super packed but wasn't too bad and the tight fit really helped me stay upright. My bro set up and started spinning some tunes around 9PM which got us all ramped up for the main event...The Orbitsuns. The band showed up shortly after 10 and fired up about a half an hour later. Heart rates were high as these guys jammed the tunes. They didn't take a single break and had everyone on their feet dancing well into the night. They did not disappoint. I had a blast and enjoyed seeing everyone there. Thank you to all who came out and A BIG THANKS to Bell's Brewery, The Loading Dock and The Orbitsuns for one helluva night. My only question is, can we make it bigger and better next year??? Also, special thank you to our sponsors; Quiring Cycles, Bells Brewery, Aberdeen Bike and Fitness, Oakley, Stans No Tubes, Clif, Crank Bros, Paint Creek Bicycles and Pearl Izumi. I'm already looking forward to 2009. Climb on everyone. And, of course, HAUL ASS! Joberon
Joberon in the pack at Williamsburgh 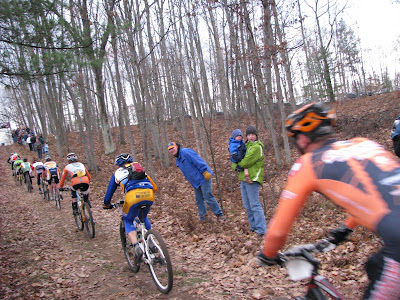 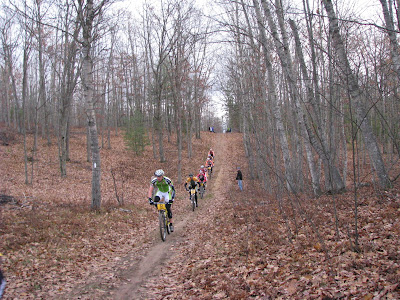 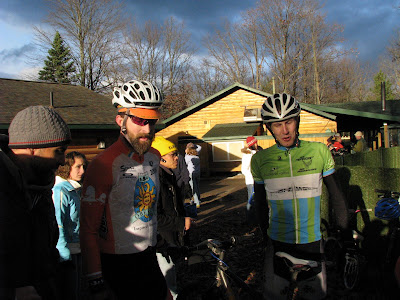 Posted by Quiring MTB Team at 6:44 AM