John Meyers and Scott Quiring raced rough-sandy west side cyclocross race this past Sunday in Grand Rapids at Cannonsburg Ski Area. The "A" race had 23 riders roll off and on too a rough and twisty....twisty course. Once again a great hole-shot and up to the first turn and a specialized rider shot past on the feather lite 14 - 15 pound bike....and thru the first lap and second I was able to maintain 3rd. The Bissel Bro.'s were just up the course also but with the fever crud from Friday and Saturday's founders to bell's 4 1/2 hour xc ride the legs and body was just not 100% I know Dan Jansen and the Farmer were feeling the post ride party with the tasty two-hearted that were consumed at Bell's on Saturday night. Scotty "Q" I am back was on the scene as well and it was great fun rolling with or trying to chase him thru the twisty maze of a course. So is Scott due to make an appearance at the Iceman? 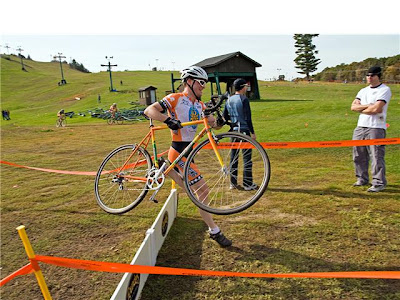 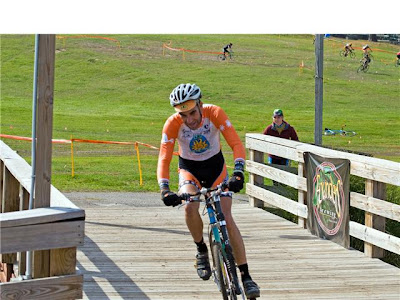 Scott Quiring hits the run up behind John. 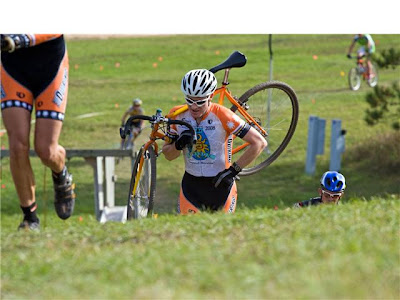 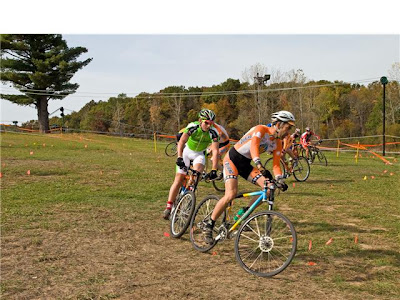 Posted by Quiring MTB Team at 7:05 AM