Joe Brzuchanski aka Joberon Brewchampski hit the 3rd round of the National Moutain Bike Series in Vermont. Check out Joe's weekend report below :
My first MTB race was a NORBA back in the o'l Schuss Mountain days in TraverseCity Mi. I remember having no idea what to expect as I rolled to the start line with the other beginner 19-24's. Fast forwarding 10 years to this past weekend I found myself at the 3rd stop on the NORBA circuit. Mt. Snow in the beautiful state of Vermont. After a couple of course test laps guided by the super talented Kelli Emmett(Ford Cycling) I was starting to feel ready for the races. On Friday, after watching Justin and Pete of the Kona crew kick some butt in the Semi ProXC, I started warming up for the Expert Short Track event. Minutes later the NORBA announcers, a couple of them were pretty fun and animated I might add, started to call us up to the line. And, just as I was 10 years ago, full of nerves and knew not what to expect. The competition looked quite fierce as I rolled up about 3 or 4 rows back from the front. The 20 minute plus 3 lap racestarted very fast. I was really hoping not to get a flat like the Simonster did the week prior. My second goal was not to get lapped. I was about 10 guys back until the first little climb. From there I went on the outside and moved myself within the top 5. I was certain this wouldn't last but decided to stay put and see if I could survive a lap or two. I was waiting for mobs of guys to just start passing and attacking from behind but it didn't happen. It was the opposite. A couple guys peeled off the front and I found myself 3rd wheel. Even leading a lap or two later. After 10 minutes or so our group had formed a little gap. There were about 6 of us just hanging on for dear life until the last lap when the attack came. It was a strong move that myself and one other rider could follow. I lasted about half of a lap and ended up rolling in for 3rd and a spot on a NORBA podium. Pretty sweet! Saturday I did another lap of the XC course. This would be my 5th lap of the 8 I did all weekend. Perhaps a bit much but hey...I'm pretty sure I turned in a"vacation" request to my manager;) I loved the course but the downhills were still kickin' the crap outta me. Just ask Kelli. She dropped me on every decent out there. BAH! After my lap it was time to watch the big show. It was amazing. The pro's ripped around that course like it was rail trail leading to a friggin'cider mill. Very fun to watch. Sunday was time for my Expert XC race. Thankfully we started at 8am as it was a boiling hot day. Justin and Pete told me to be sure I was towards the front before going into the technical single track atop the first long climb. I was able to position myself in the front row on the start line. Then...off we went. I had a great Lummis style start. Clicked in quickly and was the first off the line and onto the start of the climb. I was hoping to be climbing well and makeup some time there as my downhillin' ain't pretty. I was in the front for about a minute when I started hearing the sounds of the fat tires rolling past. Not too bad though. Only about 3 or 4 guys. Ok, maybe 5. But that's it! So I was around the top 5 or 6 going into the single track. As I bobbled my way through that mess I was already getting yelled at. I let some dudes by only to catch them again on the climbs. That was pretty much the story of my race. Pass me on the downhills, I'll pass you on the climbs. I ended up hanging on for a 6th place finish. One spot away from another podium spot. BAH!I'm pretty darn happy with the trip overall. Looking back I can see I've come along way from those beginner days. In a way though, my second NORBA experience has left me feeling more like a beginner than ever. I would like to say great job to everyone from Michigan that made it out there and pushed themselves. Thanks for the cheers and support from you all and my family too. It was awesome to see some familiar faces and meet some new folks too. Thanks to the Ford Team(www.fordcycling.com) for letting me hang out a bit and check out the behind the scenes...scene. Joberon --
Joes pic of the Pro Womens XC start -- Kelli Emmett is on the left--- 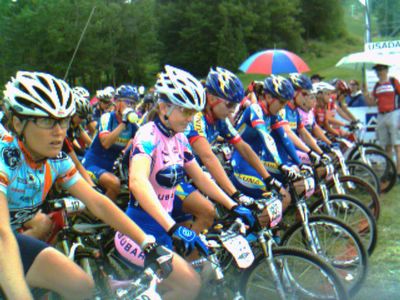 Posted by Quiring MTB Team at 5:49 AM

Yo Joe, I enjoyed the report. wish i coulda been out in VT with you guys rippin some of those rad trails. Good luck in the coming races!