Lumberjack 100 Michigans only 100 mile off road MTB race. The race started at 7am with temps in the high 60's and they would rise to near 90+ deg. Chris Eatough (24hr solo World Champion) lead the way thru the 4 laps of 25 miles each. The Simonster stayed on him as long as he could, until the heat and exhuastion caused Mike to leave the race early. John Meyers sitting in 3rd place for most the race was passed with a few miles to go and finished an Awsome 4th place overall. Jason Lummis rode a strong race and held 6th place until the last lap exhaustion had him traveling backwards to 9th at the finish line. John Meyers wins the tough guy award with a 2nd lap crash and with stretched shoulder liagaments and still drilling it to the end. After a few hours to rest the Bells/Quiring team finished off a few celebitory OBERONS (ok so we killed a case). Thanks to Scott Quirng for the trail side feed support and the beautiful wives that ran the show. RESULTS: www.lumberjack100.com
pic below: John Meyers heading for the finish line 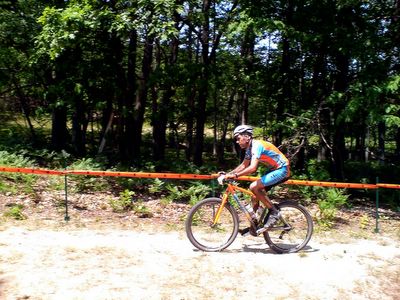