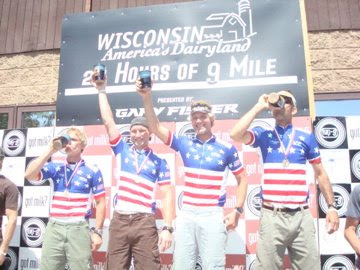 Finally the stars aligned for the four teammates on August 01-02, 2008 and they were awarded the National Champion Jersey for winning the Masters 30+, 24 Hour Race.

This was a collective effort by all and it could not have been accomplished if we had not work so flawlessly!

The race started at 10:07 a.m. It was decided the night before that with my running and xterra background would benefit the team most for the crazy lemans start. Race start and off for about 1/2 mile run or so and on to our bikes....lots of disorder....bikes bodies everywhere. I made in in about 15th or so not bad. By the end of the first lap I was somewhere around 6th. That first lap was my fastest lap and the fastest for all 30+ team laps. The race continued along with each of us having to basically race a timetrial every 3 hours. I completed 6 laps on the course with my lap times increase into the night. The last two laps were slower due to my overall upper body fatigue from the rocky, rootie course. When all was said and done we had complete 23 laps on the course and had a lap on the second place team!

I am so very grateful the Dan Jansen, Nate Versluis, and Neil Sharphorn were there as my teammates for this special day. Thanks Guys! We will have a special toast at Founders and at Bells in the near Future! And once again NASTROVIA!!!! (to your good health)