The team headed over towards Kazoo for the Fort Custer XC and a little luv at the Eccentric Cafe for Lunch afterwards.

Erin Vicary took the BIG W in the womens Open class, while Jason Lummis held on for a 2nd Place in the Mens Open. Local Star John (44 isn't that old) Meyers kept it together for a 4th place finish in the Mens Open as well. Joberon helped the team out with feedzone excellence and support after being sick all week. We owe Joe a huge thanks for the team support and his family for coming out and cheering us on. 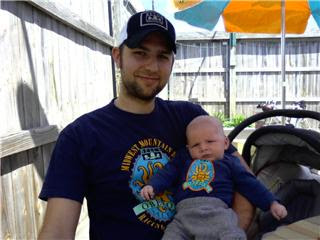 Looks like the Greenbrier Maryland marathon may have been a bit much for my already worn out system. The Monday following, after 3hrs of sleep, I awoke to those pesky sensations. Scratchy throat, a few sneezes and to few hours of sleep. What does that spell? C.O.L.D. A nasty head cold that had me completely grounded by mid week. I did everything in my power to recover in hopes of enjoying some Fort Custer hot laps with my pals on Sunday. Friday night I even tried my good buddy Marco's home remedy. Keep reading for the secret recipe. Saturday morning rolled around and I was determined to get out and ride. I was actually feeling a bit better. Had the secret ingredients from Marco's Bavarian ancestors really worked!? After a quick bite to eat I suited up and headed outwith Erin. 2 plus hours later we returned and I was feeling quite knackered. I still hadn't ruled out racing. Yeah, pretty stupid. But Custer is a riot. I knew the conditions would be great out there as it had rained a bit. I was willing to race just to ride 4 laps out there.Saturday evening we had a delicious dinner and I hit the sack hoping to awake Sunday morning feeling recovered and ready for launch.Unfortunately it just wasn't meant to be. I was still feeling a bitachy, tired and very congested. I packed my stuff anyway and we started the drive to Augusta. 2 and a half hours and a bit of pouting later we arrived at the park. The weather was perfecto. This would be the first race of the season that wouldn't have us riding through mud and muck.Arriving at the race venue somehow gave me a "I'm feeling better" kinda feelin'. I decided to suit up and see how I felt. I cruised out onto the trail and found it to be just as I had suspected. Perfectly...FAST. A bit tacky and groomed as if it had been paved. This would be a nice change after racing through a war zone at Greenbrier the week prior. A different kind of fast and furious fun. I hit the first climb, however,and realized anything involving me and a bike would be nothing but a pile of goo and puss. I didn't want to gross out my racing buddies. So,I pulled the plug and just rode out a nice easy lap. Fun but not like rolling with my teammates and friends at warp speed. All was not lost however as I had the privilege of doing hand ups for the team. I handn't done this in a while and was a bit nervous. I nearly blew in a call to Elite Team Support Feed Specialist Michelle Simonson. I managed to...manage though and all went well. I was quite proud standing on the sidelines watching my teammates at the front of the race mixing it up and, in the end, all making the podium. I'm glad I was still able to contribute in some capacity helping bring my teammates and friends to the line with groovy results. Results that...resulted in celebrating. We packed up after the race and all headed over to the Bell's Brewery bier garden. The friendly staff helped bring us back online with some wonderful grub and icy cold Oberon's in the sun. Doesn't get much better. Fun was had by all. Including Bell's Brewery first timer, my beautiful and sweet as Oberon little nephew, Emery. 4 weeks in and he's already showing he's got good taste. Welcome to the team little buddy. Good health, good racing and good times everyone. I hope to see you at the next one. Let me know if you need a hand up:) Oh! That super secret Batzner Bavarian Recipe. I almost forgot. Now, this isn't for everyone.In fact, it may only be something for the true hard men. You know,mountain bikers. Mountain bikers on beer teams. The Bell's Brewery Beer Team to be exact. Roadies, use at your own risk. You to Founders ;) Ha!! Step 1: A good hearty meal. For example, blood sausage and/or bratwurst.Step 2: A boiling hot shower/bath. Your azz had better be as red as a tomato when you're done. Step 3: Multiple layers of clothing. You need to be Sweatin' To The Oldies at this point. Step 4: Select your favorite Bell's flavor from the fridge. For this process Joberon suggests a Bell's Porter. Step 5: Pour brewski into pot or microwave safe bowl.Step 6: A couple of minutes in the micro or ~5 minutes on the stovetop. You want the brew-HA nice and warm. NOT BOILING. Step 7: Carefully pour the contents into your favorite Bell's pint glass and drink. Not too slow. Joberon suggested good healthy frat party gulps to get your melting carcass in to bed. Step 8: CAREFULLY Hopp(crawl) into bed andcover up. Step 9: The final step. Wake up 5-10lbs below your race weight and ready to rock and roll. Enjoy! 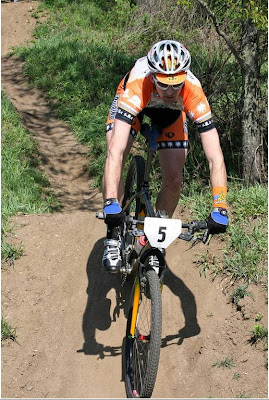 2nd place Elite ---- better than 3rd but still not as cool as Joberon's and Erin's BIG Ws. I'll keep trying and having fun in the process.

The race went well and the trail was fast. Maybe they need to lay off excessive grooming of a trail. I like to back country ski this course is like a fresh groomed skate ski track. John and I lined up against 11 others in the Elite class, while Joberon rested from his flu.

Any way I somehow managed the hole shot into the open field with the head wind, oh yeah. I kept my pace fast and accelerated into the little hills before the first set of tight single track. I looked back and things seemed strung out as I hit the entrance to the quick tight section. I ended up clipping my bar end on a small tree and stacked it in front of everyone. Blocking the trail with my mishap. I jumped up fast and ran over the log pile still on the front. We hit the first hill and just before the next Christian and Stu drove past me. John and the Farmer where back a few seconds. I just kept my pace letting Christian and Stu go. I could see Stu just head and Christian was gone. John and Nate caught on and I paced the rest of the 1st lap. Nate came thru at the end of the lap and John rejoined us. Into the headwind Nate motions me to the front and Stu is about 20secs up and in site. I feel like and catch him but I am also not wanting to drop John. I keep a steady pace for the next few miles and we hit the hills again and the 2 yo-yo off me again. I decide to close the gap on Stu and hopefully John can join up with us soon. I catch Stu and let him know I have No intentions on working unless John comes up. At the lake there is a steep little down hill with landscape rocks on it, Stu takes the wrong line into hit and endos down the hill. He jumped up I asked if he was OK and he seemed ok. I kept up my pace and told the next volunteers to makes sure he come through soon. I was just pacing myself along thru the end of the 3rd lap and into the 4th and final lap. As I was existing the Open starting field I could see Stu pushing hard from behind. I didn't panic, figuring he would have to use alot of energy chasing me down. He finally caught up to me at the water station about half way thru the lap. He could of sat on me, but he went straight to the front and pushed hard. I was ready and stuck to his wheel easily. I kept looking for a chance to try and attack him, but he wasn't going to let me go by. So I waited until just after the boat launch along the 2 track to the finish and jumped. Stu wasn't happy and I told him not to stop trying and we raced it to the line for a 2 sec time gap with 2nd place for me.

We headed down to the Eccentric Cafe after the race for some killer food and a few pints from the taps. Great weather and great group of people. I just wish my wife and son had been there.......... Lumberjack I am actually looking forward to it this year, O2S I need to improve, Chequamegon top 20 !?! The Iceman top 8? and as many local races I can get to this summer.

We have socks and wrist bands for sale:

Posted by Quiring MTB Team at 6:46 AM