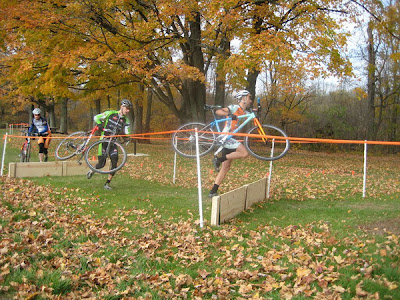 The West Side CX Race Scene!
The Kisscross race #5 at GrandRiver Park in Jenison was Speed racer fast with lots of priority green in and around the front of the race.... http://www.kisscross.com/index.htm The start was on a dirt road head north with 5 lined up wide. The speedy Steve Howard darted crazy fast off the line grabbing the holeshot and I was able jump into second. Not wanting to dig to deep this weekend and reserve something for the iceman I was looking for a few wheels to jump onto so 3rd place was great position behind Graham Howard leading up and over the first barrier and run-up. First mistake both Graham and myself blew our remounts...at the half way point on the steep hill. The next few laps became a leap frog of a few riders and somehow Russ whom I had passed and thought was going backwards blown from the Priority Health pace of the first few laps eventually work his way past me and jumped back into the chase group and would eventually finish second? Great job Russ way to dig deep and nice to warm down and chat together. I blew one more remount on the 5th lap up the steep hill just as I was making contact to chase group. I eventually backed it down and rode out the last three laps of eight by myself. Stay somewhat comfortable but not red lining it like the first five laps. So are the Howard brothers showing this weekend for the Iceman? Rumor has it that they are going to show up? Looking forward to the iceman this weekend.....I remember clear back ten years ago racing for Boure' and finishing 3rd behind Tinker and Scotty Q. Those were the days. My bet is on my teammate biodiesel Simonson! Hey Mike I am looking forward the wind up at the Sunset Party with a late night drum session, Joe your sweet guitar moves and dancing, and Jason can you chauffeur the team around in the PT cruiser after the Party!!! 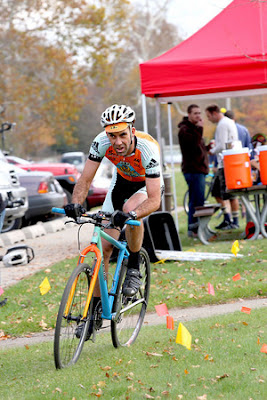